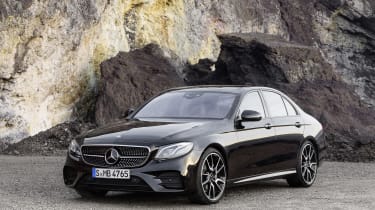 We’ve only just driven the new Mercedes-Benz E-class, and now AMG has released its first take on the luxurious new saloon, with the Mercedes-AMG E43 4Matic.

Like the recently-unveiled Mercedes-AMG C43, it won’t sit atop its respective range, but does expand AMG’s reach into previously-untapped groups of customers, with a slightly less extreme setup than the inevitable V8-powered model.

Those figures are higher than the regular biturbo V6 found across the Mercedes range, thanks to larger turbochargers and higher boost pressure. AMG also claims some F1 influence in the ‘Nanoslide’ cylinder bore coating, improving efficiency. A red aluminium engine cover is the giveaway to the engine’s AMG fettling for the curious few who lift the bonnet.

The efforts of Mercedes’ recently-introduced 9G-Tronic nine-speed automatic transmission and 4Matic all-wheel drive result in a 4.6-second 0-62mph sprint, while top speed is, as ever, limited to 155mph. Shift times are shorter than previously, with a rev-matching function on downshifts in Sport and Sport Plus modes.

E43s will ride on Mercedes’ Air Body Control suspension, albeit tuned by AMG with reconfigured adaptive damping, different steering knuckles and greater rigidity to all components. Braking is by 360mm discs all round, with four-piston front calipers and single-piston calipers at the rear.

The all-wheel drive system is naturally rear-biased, with 69 per cent of the engine’s torque finding its way to the rear wheels, and this too is claimed to be more efficient than before, thanks to reduced friction. It’s more compact too, demanding less room from the passenger and luggage compartments.

Various aspects of the drivetrain and undercarriage can be adjusted through AMG Dynamic Select. Prodding a button in the (wonderfully appointed) cabin skips between Eco, Comfort, Sport, Sport Plus and Individual modes. The steering can adopt either Comfort or Sport modes.

Exterior styling is relatively subtle, with only 19-inch wheels and a quad-exit exhaust really indicating the car’s intentions. Look closer and you’ll see larger openings in the front bumper, a distinctive grille design and a diffuser element in the rear bumper. There’s a small lip spoiler, too.

The Mercedes-AMG E43 4Matic makes its official debut at the 2016 New York auto show, later this month. Pricing and full specification are yet to be confirmed.