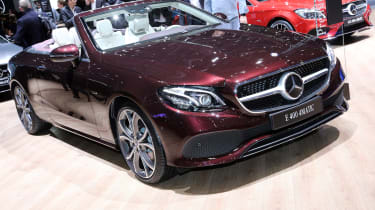 The latest Mercedes E-class kicked off with the saloon model, unveiled at the Detroit Motor Show in 2016. Since then Mercedes has added Estate, Coupe, and All-Terrain models to the line-up, which only leaves one bodystyle yet to put in an appearance. That’s all set to be remedied though, and the new Mercedes E-Class Cabriolet went on publich display at the 2017 Geneva Motor Show.

The new Cabriolet will look similar to the E-Class Coupe, but features a classic soft-top roof. Styling emphasis has been placed on clean lines and so-called ‘sensuous’ forms. With the roof down, the Cabriolet displays a long, low shoulderline and flat rear deck.

This low silhouette is aided by sporty suspension, 15mm lower than the suspension on the saloon, and standard 17-inch wheels. This will also mark the first time that the E-Class Cabriolet has been available with 4matic all-wheel drive. 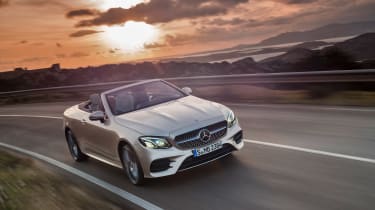 Expect engine choices to mirror the rest of the E-Class range. A selection of petrol and diesel options will be available, equipped with nine-speed automatic transmissions. Eventually we may see some AMG-fettled models, too, with V6 or V8 petrol engines providing epic performance.

Other than the new roofline, the E-Class Cabriolet is otherwise very similar to the Coupe and other E-Class models. That means the bold Mercedes ‘family face’, high performance LED head and taillights, and a long bonnet with power bulges.

The fabric roof is electrically operated, and multi-layered to improve refinement. It can be raised or lowered in 20 seconds, at speeds up to 31mph – ideal for sudden downpours. The fabric roof doesn’t impinge on boot space as dramatically as a folding hardtop would, either – capacity only drops from 385 litres to 310 litres when the roof is down. 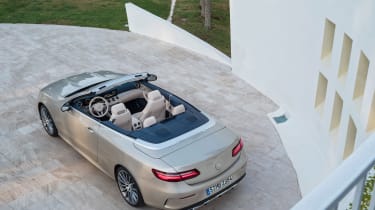 To keep occupants warm while the roof is down, Mercedes’ Airscarf and Aircap technology are available, as are heated seats.

Inside, things are much the same as the rest of the E-class range – which means optional 12.3-inch displays in place of traditional dials, plus a range of sophisticated autonomous technology.

We’ve now seen the Mercedes E-class Cabriolet in the metal at the 2017 Geneva Motor Show, ahead of a likely sales debut later this year.