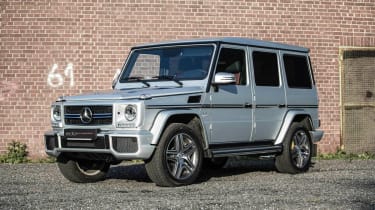 Edo Competition has developed a performance kit for the Mercedes G63 AMG SUV, enabling its twin-turbo V8 to produce a mammoth 650bhp and 664lb ft of torque.

To achieve 113bhp and 104lb ft gains over standard, the German tuner replaced the standard exhaust with a valve controlled stainless steel system, which can be adjusted at the touch of a button to ensure back pressure is at its optimum for performance and sound. Free-flowing twin catalytic converters lead into chrome-plated tailpipes, which exit in pairs on each side of the SUV, all four burbling and roaring at a volume of up to 110db.

Maximising the potential of this more free flowing exhaust is a remap, which has resulted in the G63’s 0-60 time falling around half a second to 5.0sec, its top speed limiter also being raised from 130 to 155mph.

Edo Competition has carried on its work away from the engine bay, also kitting out the interior with carbon trim, whilst lacquered wood, metal and carbon parts can be chosen by customers to add further luxury to the cabin. Customers can go further and spec personalised steering wheels, gear levers, pedals and seats in an effort to ensure invdividuality.

Despite a replacement for the venerable Mercedes G-wagen apparently arriving in 2016, tuners like Edo Competition have continued to produce extreme versions of the longstanding two-box SUV.