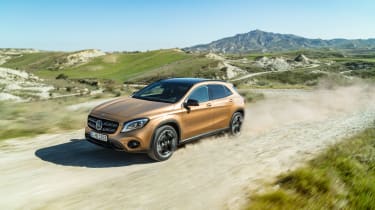 Leaving the 45 AMG models out of the equation for the moment, and assuming that few others buying the GLA will care how it handles on track, the little SUV could be the pick of the Mercedes small cars in terms of chassis set-up.

At first it's obviously softer than either the A-class or the CLA, helping it feel more grown up and less susceptible to jiggling about on its springs. There's a good long-legged sensation to how it deals with large undulations too, underlining its comfortable remit. Yet push on and it doesn't all fall apart in an understeering mess.

Even the front-wheel drive GLA 200 d is competent - especially in the dry, where its modest performance is well contained by the chassis. Clearly the 4Matic four-wheel drive versions are much more surefooted when the road turns wet and greasy and - running costs aside - they're the ones to go for. Predominantly, power is sent to the front wheels - even in the GLA 45 AMG - but it quickly moves to the back axle when you overload the front tyres, notably on exit from tighter corners. It never feels as rear-lead as say a BMW X1, but it's pleasantly neutral all the same, and the softer suspension settings mean there's enough movement in the chassis for you to sense where the limits of grip are. 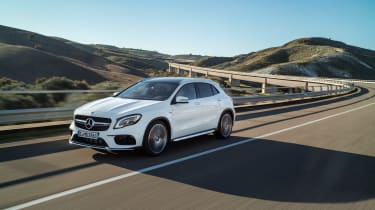 You certainly won't be relying on the steering for such information, as it's a largely communication-free zone, if not as lifeless as some electric power assisted steering set-ups. At least the weighting is good and it's modestly direct. The brakes, as ever from Mercedes, are powerful and easy to modulate, with well-judged intervention from the stability control system. It's saying something though when you realise there's little to gain from turning this off, even in the GLA 45 AMG, which soon overheats its tyres if pushed to its limits for too long in the environs of a race track.

'[On the GLA 45 AMG:] That this is going to be a pretty damn good day after all is confirmed by five minutes in the Mercedes GLA 45 AMG. Like the Audi, the Mercedes balances speed with adjustability in a completely unexpected and entertaining way. Okay, so the surface is damp right now, but the car’s keenness to react to throttle and brake inputs from corner entry to exit is in stark contrast to that deathly dull A45 we drove on track in Anglesey (evo 194), which was all grip and zero fun.' Jethro Bovingdon, contributing editor, evo 205.