Mercedes-Benz GLC - A SUV for keen drivers? - Ride and handling

Most of the range is relatively unremarkable, on the road at least. Even so, this is unlikely to put off buyers of such a vehicle. It does the important things right: the ride is respectably pliant on all but particularly corrugated surfaces (at which point the air suspension struggles to deal with rapid intrusions). It steers well enough too, with decent weight and respectable accuracy, though the chassis takes a few moments to settle after any given input – sporty driving is not the GLC’s forte.

It feels heavy too. Both 220d and 250d tip the scales at 1845kg, a good 180-250kg heavier than an equivalent C-class Estate. It’s always fighting against this mass, whether cornering or in a straight line (where GLCs are about half a second shy of a similarly engined estate in the 0-62mph sprint). The diesel feels brawny in relaxed driving, but won’t thrill if you up the pace. 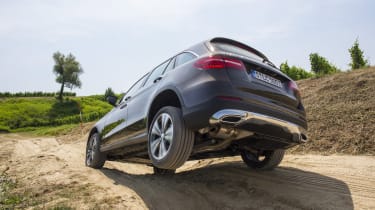 Where it does score highly is refinement. At low speeds the 2.1-litre diesel’s clatter is admirably muffled, and while the engine gets a little vocal under load, it’s probably the quietest application of this particular unit yet.

The GLC is also thoroughly impressive off-road. On road tyres, and utilising the modes of the Off-Road Engineering package, the GLC navigated obstacles we’d never have thought possible, including 70-degree inclines on shale and gravel, equally steep declines and sideways slopes as steep as 27 degrees. Each time we thought we’d become stuck, smooth application of the throttle gave the electronic brain the power it needed at each wheel to get moving again. It’s no Land Rover on the rough stuff, but it’s a genuine pity that virtually no customer will get to experience its competence off the beaten track.