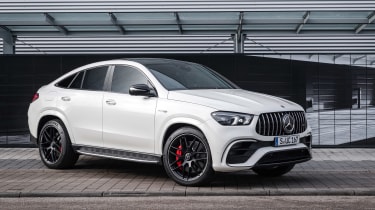 Mercedes-AMG has revealed its latest SUV, placing the 603bhp iteration of the AMG twin-turbo V8 with a bit of mild-hybrid assistance into its newest and biggest coupe-SUV, the GLE Coupe.

Outwardly identical to its more traditionally shaped GLE63 S sibling, the new Coupe has been designed to appeal as a more highly stylised performance variant that will rival the new BMW X6 M Competition and Audi RSQ8.

We’ve said it before, and we’ll say it again: this form of needlessly heavy, high-riding SUV saddled with a powerful, thirsty, performance-oriented engine and drivetrain is not really our cup of tea, but for those who actually wish for it, AMG thinks it has plenty to offer.

The engine, admittedly outpowered by the X6 M Competition’s 616bhp, is the same 603bhp M196 hot-V V8 engine as found in the E63 S, one now assisted by a new mild-hybrid system. The slightly less potent 564bhp non-S GLE63 Coupe won’t be available in the UK, but AMG’s in-line six GLE53 is there to plug the gap between standard models and the full-fat 63 S. Torque is rated at 627lb ft between 2500 and 4500rpm, which together with the prodigious power figure will get the GLE to 62mph in just 3.8sec, 0.1sec slower than the X6 M and on a par with the RSQ8.

The 48V mild-hybrid system powers an integrated starter motor and generator that itself produces 22bhp and 184lb ft of torque, assisting low-speed acceleration, smoothing out the stop-start system and adding a very subtle torque-fill between gear shifts. This system is new for the GLE63 S (both in coupe and wagon forms) and will likely be seen in other incoming 63 AMGs. Power drives an AMG-tuned 4Matic all-wheel system through a nine-speed, fast-shifting, automatic transmission. 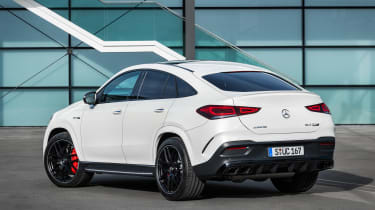 As with all performance SUVs of this size and complexity, the enemy is weight – something Mercedes has hesitated to mention. And with the standard GLE already well beyond two tons when fitted with simpler six-cylinder powertrains, we’d suspect the GLE63 S to be around 2.3 tons, incidentally the same as the X6 M and RSQ8.

To help control the mass, the 48V electrical system also powers an active anti-roll system, which like those found in Audis and Porsches compensates for lateral body movements through the actuation of movable anti-roll bars on both front and rear axles. Air suspension with adjustable dampers, an active locking rear differential, and specific AMG-tuned variable ratio steering completes the dynamic upgrade.

UK-specific prices have yet to be announced, but production will commence later this year alongside the GLE63 S wagon and GLS63 S, creating a formidable 600bhp-plus line-up of four SUV models, including the G63.