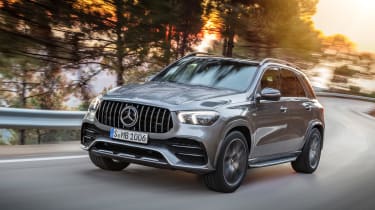 Mercedes-AMG has revealed details of the incoming GLE 53, which features the firm’s new mild-hybrid straight-six petrol engine. This powertrain has already impressed in the E-class and CLS, but will now also feature in the full-sized GLE as an entry-level AMG model before the fire-breathing V8-powered GLE63 arrives later.

Like its 53-powered relatives, the 3-litre straight-six produces 429bhp, with a peak torque of 384lb ft between 1800rpm and 5800rpm. The small ‘EQ Boost’ starter/generator adds an extra 22bhp and 184lb ft but, in typical fashion, the power sources do not peak at the same point in the rev-range. Instead the EQ Boost setup assists by filling in the torque gaps inherent in the internal combustion engine’s delivery. Response is also improved with help from the 48V system via an electrically driven compressor which builds boost pressure within the turbochargers in the moment before the engine’s exhaust gas usually reaches the turbochargers.

> Click here for our look at the new BMW X3M

This 48V system then also works in conjunction with the GLE53’s inbuilt starter motor and generator to facilitate engine-off coasting, extended start/stop functionality and energy recovery, all helping to improve overall efficiency. The gearbox is the same nine-speed automatic unit as in other 53 AMGs, with power sent to a 4Matic all-wheel drive system. Mercedes-AMG quotes a 0-62mph time of 5.3sec, topping out at the usual limited 155mph.

The GLE53 is fitted as standard with AMG’s specifically tuned air-suspension, but here it is combined with a new active-roll stabilisation system which uses two electro-mechanical actuators to counter axle load independently, keeping the body level under extreme lateral forces. The advantages over a traditional hydraulic system include much faster response times from the system, and lower weight from a less complex design of wires and cables, rather than hydraulic lines.

The suspension is also self-levelling on the rear axle, and incorporates adaptive dampers. These work in conjunction with the air springs and adapt according to the selected driver mode. Sport and Sport+ modes illicite a 15mm drop in ride height, as does travelling over 70mph in Comfort mode. The body can also be lifted by 55mm to cross rougher ground or car park ramps. 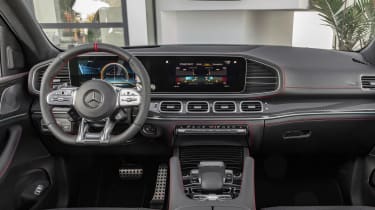 The GLE53 sports an uprated braking package, with two-piston calipers gripping 400mm front brake discs. These sit behind standard 20-inch wheels, although wheel sizes of up to 22-inches are available. Aesthetically little has changed over standard AMG-line GLE models we already receive in the UK, although the distinctive Panamerica grille is fitted as standard and should be plenty ‘sporty’ enough.

Changes inside are the usual combination of an AMG steering wheel, new seats and bespoke trim finishes. Being the medium-strength AMG GLE, these changes are relatively subtle, but will appeal to buyers wanting their performance SUV with a more understated look than the double espresso GLE 63 that we expect to see that later this year. A GLE Coupe variant will also be along shortly for those who insist on such a thing. 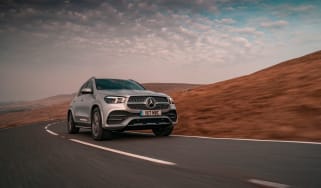