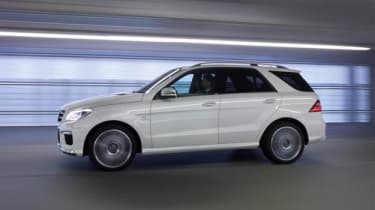 Mercedes-Benz has announced its third-generation high performance SUV, the new ML63 AMG, which debuts at this week's LA motor show.  Replacing the naturally aspirated 6.2-litre V8 of the previous model, the new ML63 AMG uses the same 5.5-litre V8 biturbo already seen in the CLS63 AMG and E63 AMG. It has marginally more horsepower than its predecessor, up 15bhp to 518bhp, but a more significant increase in torque, up by 52lb ft to 516 lb ft. Despite these performance increases, the ML63 AMG is 28 per cent more efficient than its predecessor, as well as being 40kg lighter.  Power is transmitted 40/60 front to rear via a seven-speed 7G-Tronic automatic gearbox. The AMG Speedshift system features three driving modes with an automatic double-declutch function and an eco stop-start function.  There is also the option of equipping Mercedes’ AMG Performance package, which increases the turbocharger pressure from 1.0 to 1.3 bar, yielding improved 549bhp and 560lb ft performance figures. Happily, this doesn’t affect the fuel consumption or CO2 emissions (23.9 mpg combined and 276g/km), but the top speed remains limited to 155mph. The package reduces the 0-62mph time by 0.1sec, down to 4.7sec, on par with a Porsche Cayenne Turbo. It also includes a carbon engine cover, red brake callipers and an AMG performance leather trimmed steering wheel. The new ML63 also includes a newly-developed Active Curve System, standard on all AMG MLs, stabilising body roll by using active roll bars on both axles. It works with the independent AMG sports air suspension, the automatic level control and the Adaptive Damping System to enhance agility, lowering the car at high speed for improved stability.  Mercedes claims that the original ML55 AMG invented the high performance SUV back in 1999 and this new model will remain true to its spirit. Rivals that have joined the genre since include the Porsche Cayenne Turbo, BMW X5M and Range Rover Sport. Maserati, Aston Martin and Bentley are also due to enter the market segment in the foreseeable future. UK pricing is yet to be announced, but expect to pay north of £80,000 for the new ML63 AMG, which will be available from Spring 2012.