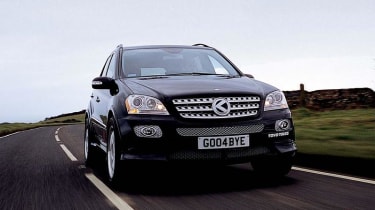 This is a novelty: I'm driving a modified Mercedes ML, a car I haven't yet driven in standard form. It's made by Danish tuner Kleemann and is called the ML50K S8, a name that appears to have been concocted solely to acquire a cheap personalised number plate. In fact, the Kleemann's title can be easily decoded: it's an ML with a 5.0-litre supercharged (kompressor) engine tuned to stage eight. To anyone brought up on the tuning codes used by Bill Blydenstein and his ilk, stage eight sounds impossibly high. It's not - the output of the standard 5-litre V8 virtually doubles, from 306 to 595bhp. Yup, this is a 600bhp on-roader, near as. The engine neatly installed beneath this ML's bonnet is the same as that which put a rocket up the nightdress of the already nippy SLK55 AMG (evo 083). So although the ML weighs over two tons, the enormous torque produced by the force-fed V8 - 568lb ft at 2000rpm - should make light of its burden. Claimed performance suggests as much: 0-62mph in 5.3sec, top speed 168mph. What goes into those stages? Well, stage 1 is an ECU upgrade, 2 adds re-profiled cams and uprated valve springs, and 3 revised manifolds and downpipes for an uplift of 60bhp and 50lb ft. Stage 4 starts the process again with the addition of the supercharger, 5 adds an ECU upgrade, 6 the cams and valve springs, 7 the manifolds and downpipes and, finally, stage 8 a complete exhaust with four steel catalysts. These engine mods alone will set you back around £27K. The market will stand it, says Steen Greve, MD of Kleemann Ltd (UK). For some buyers it's worth doubling the price of a stock ML (or S-class, SL or SLK) to have something special, something different. And you can easily do that if you add the 20in wheels and tyres, body styling, high- performance brakes (supplied by Brembo) and electronic suspension-lowering processor. Fire up the V8 and the car throbs with a heavy beat. It sounds discreet enough, so it was a shock to discover, some miles later, just how loud and aggressive the note blaring from the twin oval tailpipes really is. Crack the windows down a few inches and the sound is full-blooded Nascar, but cranked round to 11 with the loudness on. Add a tunnel and it's absolutely terrifying... The Kleemann has the bite to go with the bark, that monster engine thumping it down the road with such sustained determination that you wonder how it can possibly work in anything smaller and lighter. The new ML's seven-speed auto is a column shift with buttons on the wheel for manual operation. Kleemann is working on crisper shift programming, but it works pretty well anyhow, and it's useful to be able to punch down gears without taking a hand off the wheel. The big brakes are powerful and consistent, and grip is strong, but it feels good to use engine braking to help haul off speed. 'Comfort Power' is Kleemann's tagline. Their ML lives up to that, with a satisfyingly supple ride underpinning taut handling. While it's never going to be the last word in feedback and delicacy, it feels reasonably agile and composed. It's certainly able enough to make 600bhp seem a useful amount.