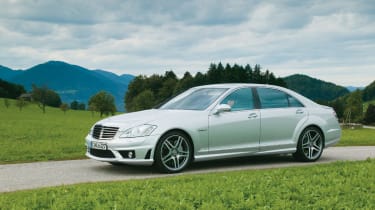 Coming after the intergalactic, biturbo V12-engined S65 AMG that blew us away last month, you could be forgiven for thinking that the S63 AMG is going to be, well, a bit gutless.

With not so much as a turbo or supercharger in sight, this monster Merc relies on AMG’s recently introduced normally aspirated 6.2-litre V8 for motivation. With 518bhp and 465lb ft of torque it’s hardly lacking by normal standards, but AMG doesn’t work to normal standards…

Put your foot down in the V12-engined flagship and it feels like you’ve unleashed some kind of small thermonuclear bomb. That’s what 737lb ft of torque – electronically limited, of course – does for you. Do the same in the S63 and there are still immense reserves of power to draw from, but the V8 has to work at it. It sounds great – all snarly and potent – but it has to rev harder and kickdown further into the seven-speed auto’s ratios to deliver the best of its formidable performance. It’s nothing a brace of turbos wouldn’t sort, so doubtless the megalomaniacs at AMG are working on it right now.

AMG confesses that some of its customers miss the grunt of the old supercharged ‘55’ engine – which delivered 51lb ft more torque at half the revs – but counter by saying that, with time, most come to appreciate the 63’s sharper response and more overtly sporting delivery. While this may be true of E, ML and CLS 63 owners, we believe the rev-hungry V8 feels least suited to the S-class supersaloon.

As ever, the S-class chassis is a miracle of mass reduction. You simply don’t feel like you’re in two- tons-plus of raging super-luxury saloon, even on winding sections of road. The steering is pointy and direct, the damping calm and controlled. Hell, it shouldn’t be fun to punt this thing around, but once you’ve dialled yourself in to the S63’s preferred style, it genuinely is. The paddle-shift auto works well, with incisive up- and downshifts; the brakes offer smooth, linear, eyebrow-loosening power, and despite having to absorb the huge forces that result from the pace at which this S gains speed between corners, they remain resolutely effective.

The S63 is slightly flawed, then, but still a great car. And with a basic price expected to not exceed five figures, it’s cheaper than the stratospherically priced S65, but not that much cheaper to your average gazillionaire. And in the crazy world that these cars inhabit, it’s hard to imagine wanting to be in the slower, cylindrically-challenged relation of AMG’s S-class patriarch. 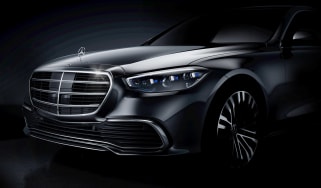