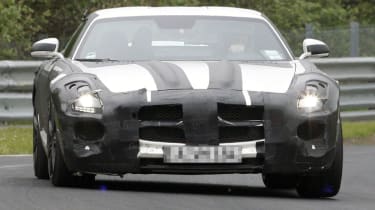 The modern day Mercedes Gullwing is mere months away from its big unveil now, and our spies have got the clearest shots yet of it out testing.

Camouflage is now fairly light, following on from the release of sketches that reveal the broad look of the car. This white test SLS bears more than a slight resemblance to the outgoing Mercedes SLR McLaren in profile and rear three quarters, the rear lights in particular looking similar to the flawed supercar’s.

The front end of the new car is particularly new and striking, though, with a wide and dramatic grille, with plenty of cooling for the front-mounted engine and a nice big three-pointed star to ensure its identity won’t be mistaken. The front lights look more than a little Nissan GT-R, mind. The star attraction styling-wise is those gullwing doors, though, which are full-sized and open in a manner that apes the achingly cool 300SL.

Power comes courtesy of a 6.2-litre V8 engine with 564bhp on offer. It is set to shift the SLS – which will weigh less than the 1.5-ton SLR – from 0-62mph in 3.8se, 0-124mph in 12sec, and onto a limited 196mph top speed. Dynamics will get a big prod in the right direction by near perfect 48/52 front/rear weight distribution, which comes partly thanks to the engine. While front-mounted, it is well behind the axle making the car almost mid-engined, with power inevitably going to the rear wheels.

The big reveal of the SLS AMG supercar will be at the 2009 Frankfurt motor show in September, with sales kicking off midway through 2010. It’s set to cost around £150,000 – half that of the SLR McLaren, and directly in contention with the new Ferrari F450, also due for a German show reveal. That’s a fight we’re looking forward to.

Read our Mercedes 300SL - Birth of an Icon feature here.