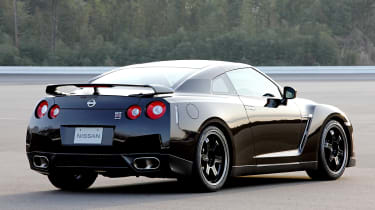 Since we first spied the GT-R SpecV prototype testing at the Nürburgring last September, much has been reported on this car. We’ve heard about its lightweight carbonfibre body parts, its £36,000-plus carbon-ceramic brakes, its high-gear boost control, the unique Bilstein suspension and ultra-high-performance Bridgestone tyres. But up until now we have only been able to guess how this car might perform and what numbers it could generate. So when we were invited to test the SpecV, we packed our VBOX timing equipment and headed for the wilds of Nissan’s Tochigi test track, two hours north of Tokyo.

Sitting there, the SpecV certainly looks more menacing than the GT-R. Shaded in optional £4300 Ultimate Black Opal paint, its new carbonfibre brake ducts, grille and rear wing not only give it a racy nuance, they also reduce weight. Ditto the 20in forged aluminium wheels by Rays Engineering, while on the inside, chief vehicle engineer Kazutoshi Mizuno has removed the two tight rear seats and fitted two ultra-thin carbonfibre Recaros up front. All up, the SpecV has lost 60kg, but with a resulting kerb weight of 1680kg, a bigger drop still would have been welcome.

Press the starter button and the SpecV springs to life with a deeper, throatier burble than the stock GT-R thanks to its new titanium-coated exhaust system. The SpecV’s twin-turbo 3.8-litre V6 is painted black instead of silver, and Nissan quotes an extra 5bhp, taking power up to 478bhp. Again, less than we expected. But, as Mizuno explains, ‘That was not our aim. We wanted to lift the on-road thrill factor, not power. And redefine brakes.’ That said, he did fit a boost control device that allows the car’s 433lb ft of torque to be momentarily broadened, but we’ll get to that later.

Acceleration first, then. The revised VDC (Vehicle Dynamic Control) now permits the car to launch at lower revs, thus placing less stress on the transmission while still allowing lightning-quick take-offs. So lift your right boot off the brake and floor the throttle. In contrast to the original 2008MY GT-R’s brief loss of traction at launch, the SpecV takes off instantly with virtually no wheelspin and gains speed like it’s been catapulted from an aircraft carrier. Zero to 60mph comes up in 3.4sec (evo recorded 3.8sec for the regular GT-R), while the quarter-mile flies by in 11.5sec at 125mph. That’s 430 Scuderia and 911 GT2 territory.

Next, over to the slalom, a true test for the revised suspension set-up and tyres. The adjustable Bilstein dampers have gone, so no more flicking the centre-console switch to change between Race, Sport and Comfort. Instead, the SpecV gets fixed dampers, tuned for grip and handling. Bespoke tyres, too. One glance and they might look like stock 20in Bridgestone Potenza RE070Rs, but they’re not. To endure the extreme braking forces of the SpecV, Mizuno asked Bridgestone to add rigidity to the sidewalls and shoulders and to design a more aggressive tread pattern that puts more rubber in contact with the road. The brakes, meanwhile, are just a bee’s weeny shy of the stoppers found on a GT racer, with six-piston calipers and enormous carbon-ceramic discs, giving what the engineers reckon is the most powerful and fade-resistant set-up you’ll find on any road car.

Pushing the SpecV through the slalom, it’s immediately obvious how much more composed it is at speed, with more feedback than before and no understeer. Grip is titanic, but the ride quality is still acceptable, and its slalom speed of 74.7mph is nearly 1mph faster than the standard GT-R. The extra grip shows on the skid plan too, where it returns a sensational figure of 1.12g, compared with the stock GT-R’s 0.93 and the Corvette ZR1’s impressive 1.06 in the same test.

The only disappointment initially is the brakes. From 60mph to zero, the SpecV can only match but not better the GT-R’s 106ft. Perhaps we didn’t bring them up to operating temperature. Fortunately there’s a winding two-mile test track at Tochigi and it takes just a couple of sighting laps to get some heat into the brakes. Next time round, open the throttle more and leave the braking later, diving deeper and deeper into each successive corner. And the SpecV just keeps delivering, inviting you even deeper into the turns. Once again the grip this car generates proves truly phenomenal.

But nothing can really prepare you for a braking force that literally throws your upper body forward as you jump hard on the anchors. Apparently up to 2g is being generated under full braking from 150mph. And it does feel that brutal, like pulling up in a GT racer. But the car remains stable and flat throughout the whole process, instilling an eerie sense of calm. You almost feel as though you are coming out of hyperspace as the scenery slows down like stars pulling up beside you in a blur of light.

And no matter how many laps you do, every photon of braking force is there for the taking, every time. There is absolutely no brake fade. In the past, we have noticed that the GT-R starts to show brake fade after five laps of the Fuji Speedway, although that does include braking from 170mph at the end of its mile-long straight, a test we can’t reproduce here. However, Mizuno says that the SpecV could push its limits all day at Fuji and come back for more the next day. I believe him. The only downside is that when you do need to replace your pads and discs, you’d better have upwards of £36,000 in your back pocket…

As I exit yet another corner at Tochigi, I flick the steering-wheel-mounted switch that engages the high-gear boost control, just to see what all the fuss is about. It delivers an extra 14lb ft of torque in an 80-second burst between 3500-5000rpm. That’s right, one flick of the switch and you get a noticeable boost – not strong, but noticeable – just where you need it. ‘Just enough for half a lap of a race track like Fuji Speedway,’ explains Mizuno.

And that’s exactly where this car is at home, going full-throttle on a circuit. Nissan will soon take the SpecV to the Nürburgring and attempt to smash its own 7min 29sec lap time, and you wouldn’t bet against it.

In the SpecV, Mizuno has created a GT-R track special packing prodigious brakes, super-grippy rubber and a suspension set-up that generates both ample traction and acceptable ride levels. But all that comes at a premium. Try £115,000. That’s roughly double the price of the base GT-R, at which price the SpecV could be a hard sell, even if only 30 units a month will be made. Meanwhile, we’re told there are more GT-Rs in the pipeline. Watch this space.