The Merc was the fastest road car in the world, back in 1954 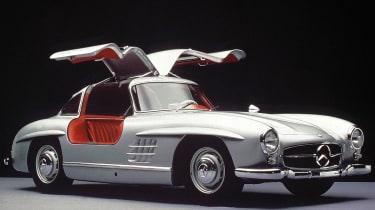 It’s often said that the best cars are the vision of one man. In most cases, though, the man in question works for the company that will turn his vision into reality. Maximilian E Hoffman was the exception.

Born in Austria, Hoffman enjoyed success as a racing driver before becoming a car dealer. He moved to America soon after the outbreak of the Second World War, and in 1947 began importing European cars to the US.

By 1948 his company was the eastern United States importer for Jaguar but, recognising the demand for high-quality European cars in his adopted country, Hoffman wasn’t going to stop there. There was one European car in particular that he knew he could sell on the other side of the Atlantic. The only problem was, it was a race car, not a road car.

Unable to afford to return to Grand Prix racing, Mercedes-Benz’s first post-War racer was instead built to compete in sports car events. It used the company’s most powerful engine at the time, the 2996cc straight-six from the 300 saloon, but modified with a new cylinder head and fitted with three Solex carburettors to raise power from 115bhp to 170bhp. This was still a relatively low power output compared with its competitors, so chief engineer Rudolf Uhlenhaut knew the rest of the car would have to compensate. To this end he designed a rigid, lightweight tubular frame and clad it in an aerodynamic aluminium skin. To keep the bodywork and centre of gravity as low as possible the engine was canted over at 50 degrees, but it was the high side-members of the frame that presented the greatest challenge.

Racing regulations stated that doors must be fitted to the car, but conventional items simply wouldn’t work. Instead the ‘gullwing’ design was created, allowing the bottom of the door to sit higher up the bodywork and creating an opening in the roof when a door was raised, thus making access to the cabin easier. (What this solution would mean if a car ended up on its roof was another matter altogether.)

The 300SL – 300 referring to the 3-litre engine capacity, ‘SL’ short for ‘Sport Leicht’ or ‘Sport Light’ – was an instant success in competition. In 1952, SLs came 2nd and 4th on the Mille Miglia, took 1-2-3 finishes at Bern, Switzerland, and the Nürburgring, and finished 1st and 2nd both at Le Mans and on the Carrera Panamericana.

Point proven, Mercedes retired the 300SL at the end of the year to concentrate on developing a Formula 1 car for the 1954 season. And there the story would have ended, but for Hoffman. So keen was he for Mercedes-Benz to produce a road-going version of the SL that when his request for just such a car was rejected he placed an order for 1000 examples. The Mercedes board could no longer resist, and in mid-1953 work began on creating a 300SL fit for the road and production.

The car would undergo a number of changes. Most obvious would be the bodywork, which would adopt a new look in line with the smaller 190SL roadster launched around the same time. The body would be mostly steel rather than aluminium, although the latter would still be used for the bonnet, bootlid, door sills and doors (all-aluminium bodywork was available at extra cost, but only 29 customers would request it). Under the bonnet the Solex carbs would be replaced with Bosch fuel injection (the SL was one of the first cars to employ such a system) upping power to 215bhp.

Appropriately, the road-going 300SL’s February 1954 debut would be at the International Motor Sports Show in New York. Costing almost twice as much as the 190SL, it was a hugely expensive car, but it was undeniably glamorous and desirable too. With a claimed top speed of 155mph, it was also the fastest production car in the world. Hoffman really had got his race car for the road.