How might the Mercedes SLR McLaren have been if it were more McLaren and a little less Mercedes? The McLaren Edition SLR reveals all 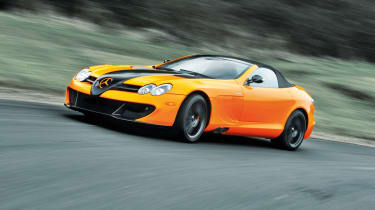 Of all the supercars to emerge in  the early part of this century, the Mercedes SLR McLaren is perhaps the most misunderstood. It never really seemed to know what it was trying to be, a fact reflected in its conflicted name and slightly awkward driving experience. So while it possessed otherworldly looks and mighty performance fused with genuine useability and a ton (perhaps literally, judging by the kerb weight) of technology, the motoring press remained lukewarm, preferring the seductive Ferrari 575 or sublime Porsche Carrera GT.

It’s worth bearing in mind that although the SLR failed to seduce the media or truly live up to the expectations set by the union of an illustrious Formula 1 team and its engine supplier, those customers who ‘got’ what it was trying to do did so whole-heartedly. Smart and engaging customer events created a close-knit community feel and the clever evolution of the car resulted in many becoming serial or even multiple SLR owners.

There’s an appendix to the SLR story – one I find pretty remarkable – and that’s the fact you can readily find examples of early coupes for sale at less than £120,000, and Roadsters for £150k. That seems like remarkable value for an all-carbonfibre, 200-plus mph car, especially one that combines rocketship styling with the durability of Mercedes-Benz and the kudos of McLaren pedigree. Indeed, now that the SLR in all its guises (see page 126) has long since ceased production, and with that strange process of absolution reserved for less-than-perfect cars slowly working its magic on the enigmatic McMerc, the SLR’s fortunes seem poised for a revival. Just to help things on their way, McLaren’s MSO (McLaren Special Operations) department has gone all Ridley Scott on us, producing the supercar equivalent of a director’s cut in this, the McLaren Edition SLR.

Like all of MSO’s creations, this re-working of the SLR centres around the ability to offer bespoke personalisation, but there’s the added dimension of off-the-shelf cosmetic and hardware upgrades. This combination means that no two McLaren Edition cars will look (or cost) the same, but this customer car is an example of what can be achieved. Based on a Roadster 722 S, it has received the full body conversion – that’s to say a new nose section (with a much more prominent front splitter), re-styled gills aft of the front wheels, a more aggressively upswept bootlid spoiler and a new rear diffuser. The paintwork has been completely re-done to the customer’s wishes, as has the interior upholstery, detailing and the seats themselves, which now offer significantly improved lumbar support.

Find a McLaren Mercedes SLR on evo Cars for Sale

Mechanically the Edition SLR can’t go out on a limb, simply because McLaren doesn’t want to mess with the inherent durability or Type Approval compliance of the regular SLR models. But this doesn’t stop MSO from making improvements, either through applying elements of the later models to earlier cars, or by making simple, logical enhancements in areas where it doesn’t require a fundamental re-working of the car. Some of these upgrades, such as the rear diffuser and uprated cooling system, have come from 2009’s limited-edition Stirling Moss variant, while others, like the changes to the power steering, have been done in-house. Many of the Edition team worked on the build of the original cars, so nobody knows them better.

Though no one would go on record to say as much, you do get the sense that now the official road-car partnership between McLaren and Mercedes has been dissolved, the boys from Woking are keen to put their own stamp on what was originally not so much a meeting of minds as a butting of heads. This extends to the little details and flourishes as much as the bigger statements, so for example, the brake calipers now wear McLaren logos. Likewise the side gills now ape McLaren Automotive’s ‘Speed Marque’. That’s that little Nike-like crescent, in case you were wondering. Coupled with this particular car’s retina-sizzling shade of orange inside and out, there’s no question the McLaren-ness has been ramped-up, while the Mercedes bit has been pushed into the background.

This car is about to be delivered to its owner, who has kindly allowed us to try his ‘new’ machine within the safe confines of the Millbrook Proving Ground. It took ‘Bones’, one of MSO’s technicians, half a day to apply protective strips of blue masking tape to the paintwork for our fast driving, and it then took four of us an hour and a half to remove it again for photography, in what must count as the slowest striptease in history. Suffice to say we don’t want to take any chances with stonechips, but the anticipation of seeing the naked car is killing me.

To be honest I’m not sure how I was expecting to feel on first acquaintance with the Edition. I certainly wouldn’t have put myself down as an SLR fanboy, yet there’s no denying it has genuine rock-star presence. It also looks strangely petit, but it still has a whiff of Wacky Races about it thanks to its extraordinary proboscis, which is now longer, wider and has sharper and more defined edges. Ashamed as I am to admit it, I think the Edition could do with 20 or even 21in rims, rather than the 19in alloys from the 722, but McLaren wanted to stay true to homologated parts, wheels included.

Lift the bonnet and you reveal the SLR’s monster 5.4-litre supercharged V8, which is set a metre behind the centreline of the front wheels and remains unchanged from the standard 722 spec, meaning 641bhp and 605lb ft of torque. As I don’t recall even the regular 616bhp SLR needing more performance, that’s no bad thing. A total SLR nerd might also spot the new carbonfibre structures that house the revised cooling system, likewise the lightweight exhaust system that saves around 20kg and adds a bit more meat to the SLR’s seismic, pulsing throb at tickover.

Inside it’s very orange – the carbon sections of the dash were painted at the owner’s request – and a real event, despite the Mercedes-Benz switches, which are rather ordinary to look at. Still, there’s nothing ordinary about the view through the steeply raked windscreen, nor the sense of proximity to the engine. Stretch out your foot and you’d swear you could give one of the cylinders a tickle with your toes.

The revised steering is much heavier than I remember, especially at idle and low speed, but it’s also less jumpy and more linear in its response, so you feel much more connected to this SLR than the standard car. The exhaust note is penetrating and percussive, especially under load, but on part throttle the aural swagger fades into the background so as not to compromise the McLaren Edition’s long-range capability. What’s clear is that there’s a real sense of occasion about this car. Okay, so much of that was present in the regular SLR, but the styling, soundtrack and steering have accentuated the character and addressed one of the major dynamic and tactile failings in the original car. Together these changes make this SLR tangibly more appealing and satisfying to drive.

How does an SLR feel in 2013? Pretty bloody epic, it has to be said. With an abundance of torque and an instant throttle response, it punches forwards with almost shocking violence and a soundtrack straight from a piston-engined fighter plane. You hear (and feel) every cylinder pulse thudding from the stubby side-exit pipes, overlaid with the vibrato whine from the supercharger so that you feel like you’re right amongst the gnashing components. The steering makes it easier to place the SLR through corners and keep it on one neat trajectory, rather than you having to keep nibbling away to try and gauge what the distant front wheels are doing.

Electronics have come on an awfully long way in the relatively short time since the SLR was state-of-the-art, so you don’t have the fine adjustability of the latest traction and stability control systems, nor do you have the raft of steering, throttle and gearshift maps that cars like the Ferrari F12 have. Hell, the SLR has a five-speed torque-converter auto, so it’s hardly fizzing with synaptic sparks. What it does possess is a haymaker punch, plenty of grip, strong traction and a duality of character that means you could quite easily point its endless bonnet at Monaco, Munich or Montevideo and make stops only for fuel.

Sadly the one thing the McLaren Edition upgrades don’t address are the brakes, which are massively potent when you really need to stand on them, but virtually impossible to modulate smoothly or precisely at urban or even open-road speeds. They’re never less than frustrating, but prior experience tells me that with time you do learn to mitigate some of, if not all of their inconsistencies.

What does all this work cost? Well, as a package (excluding the personalisation seen in this car) the McLaren Edition conversion costs £150,000. That’s a significant amount of money, but given a full re-spray alone would cost you in the region of £25-30k if done by McLaren, the total cost of the MSO work is by no means outrageous. Add upwards of £120k for your base car, however, and you’ll be well past F12 and Aventador money. But perhaps that’s missing the point. For some people – particularly those who gelled with the original SLR – the prospect of a refreshed and personalised SLR will still seem like a no-brainer.

Some SLRs they made earlier

SLR (2004)The SLR was launched as a coupe. Weighing in at 1693kg it was heavy for a carbon-bodied car, but its 617bhp supercharged V8 ensured true supercar performance.

Roadster (2007)Same powertrain as standard coupe with an extra 57kg to shift thanks to folding fabric roof. Performance was barely affected, though. Scissor doors remained, too.