Mini unveils the Roadster version of its mad Coupe Concept 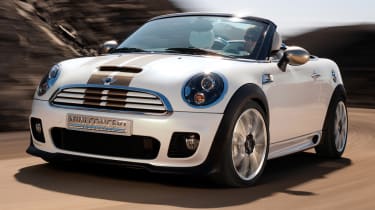 Not wanting to be outdone by Mazda’s now-even-better MX-5, Mini has gone and removed the wrappings from this, the Coupe Roadster concept.  As if the surprising new Coupe wasn’t enough.

While the Coupe gets the 208bhp, 1.6-litre turbocharged powerplant from the mildly insane JCW Cooper, the Roadster concept is mated instead to the 1.6 turbo found in the 175bhp Cooper S.  There’s no word on performance yet, but it won’t be too different to the Cooper S, which runs from 0-60mph in 7.8sec and onto a top speed of 135mph.

In spite of the less powerful engine, Mini is still touting the Roadster as an entertaining drive.  Throwing the prospect of open-air driving into the mix should more than make up for the power shortfall.

As with the Cooper S Convertible, the roof itself is another canvas set-up, which is still visible when stowed away behind the seats.  In order to keep it simple and light, however, it won’t be operated electronically, and unlike the regular cabriolet conversion on the hatchback, removing the roof hasn’t had any effect on the 250-litre boot space.

BMW is still calling both the Mini Coupe and Roadster prototypes, although there’s no reason why they wouldn’t put them into production – if they choose to do so, it could reach British roads sometime in 2011.

Obviously this means that there’s no word on what it’ll cost yet, but with the Roadster and Coupe setting their sights firmly on the MX-5 and Peugeot RCZ respectively, prices will likely start from around £17,000.