Gildred Racing’s Super Cooper Type S throws 500whp to the rear, thanks to a Honda-derived V6 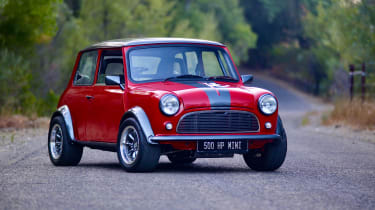 Hot hatches of old are famed for their impossibly low kerb weight, tiny dimensions and resulting kart-like handling. Today’s efforts have a much stronger focus on what lies under the bonnet, but what happens when you combine the best of both? California-based Gildred Racing found out...

Working primarily on pre-BMW Mini Coopers, the fabricator offers anything from a simple restoration through to the range-topping Super Cooper Type S. Though moderate flared arches, 13-inch two-tone Minilite wheels, and a few other subtle aesthetic tweaks set it apart from Austin’s original, it’s what lies under the skin that really sets it apart.

Despite a front-engined, front-drive factory set-up, the Super Cooper Type S flips that on its head, sending power to the rear from a rear-mounted engine. Fed by those NACA ducts on the rear windows is a 3.5-litre Honda V6, now fitted with a Rotrex supercharger for a power output of around 500whp and 383lb ft of torque – consider its 900kg kerb weight, and you’ll find it betters even the Bugatti Veyron for power-to-weight.

This power is translated to speed through a six-speed manual gearbox, a limited-slip differential, and wide, sticky Toyo R888 tyres. Though exact numbers haven’t been recorded, Gildred Racing quotes a 0-60mph sprint of under four seconds for the Super Cooper Type S – top speed is yet to be tested, but we can’t say we blame them for shying away from high speeds in a car with such a short wheelbase… 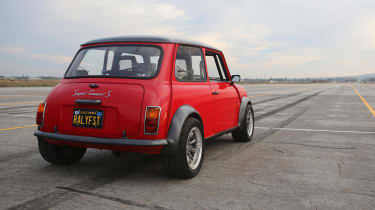 Fast lap times aren’t high on the agenda, but in order to handle the additional performance, fully adjustable QA1 suspension is included, alongside an uprated braking system and extensive structural strengthening in order to increase torsional rigidity.

Aside from the neatly packaged supercharged V6 behind the seats, you’ll find a raft of tasteful modern additions inside. The optional Sport interior package adds Recaro racing seats, a suede headliner, a custom centre console and more. However, the likes of electric windows and push-button start all come as standard. The Premium entertainment package shorehorns an uprated seven-speaker Alpine system into the cabin, complete with a subwoofer, amplifier and 9-inch screen. You even receive air conditioning, with all componentry mounted at the front for improved weight distribution.