UK firm SB Motorsport is shoehorning the powertrain from a Nissan GT-R under the body of a Navara, and progress is coming along nicely 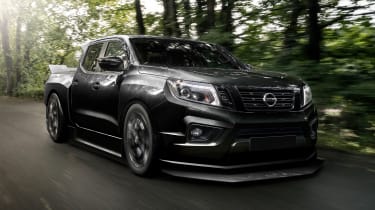 Thought the Nissan Juke R was wild? Essex-based SB Motorsport has announced plans to shoehorn an R35 GT-R’s powertrain into a Navara pick-up. Responsible for some of Europe’s most successful drift machines, the firm has been using pandemic-induced workshop downtime to work on its most extreme creation yet.

Since its announcement in May, the company has been hard at work stripping down the standard Navara of its bed and body, exposing the underlying ladder chassis to get it ready for its new and rather different underpinnings. The suspension turrets were first modified to fit R35 GT-R subframes, with custom-made coilovers fitted and chassis reinforcement measures applied thereafter – SB Motorsport has also ensured the engine bay is ready to welcome that glorious VR38DETT power plant.

Full specifications are yet to be disclosed, however we do know that the GT-R’s twin-turbocharged V6 will send in excess of 1000bhp to all four wheels; quite some upgrade from the Navara’s standard four-cylinder diesel. As you might imagine, the model’s factory running gear wouldn’t take kindly to such power, and so it will be suitably reinforced to handle the extreme loads.

Responsible for the model’s wild new design is Sterling Automotive, with its new renders revealing the use of aggressive bodywork with flared arches accommodating an increase in track width. The Navara R also looks set to receive substantial aero kit throughout, including a big front splitter, large rear diffuser and ducktail spoiler at the rear. 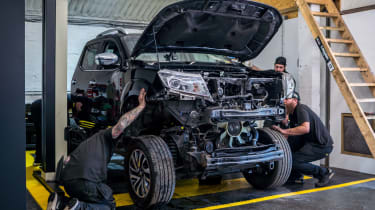 Despite its extreme performance, the Navara R will sport number plates and as many of the pick-up’s standard components as possible. Company founder, Stephen Biagioni, said: 'With this build, the aim is to keep the Navara road-legal, all the mod-cons of the vehicle, rather than creating a race-car chassis with minimal extras.'

Biagioni holds a number of accolades to his name, having seen success in a number of drifting events across the globe, and being the first English driver to compete in the famous Japanese D1 series. He said: ‘With racing currently on hold this was the break we needed to re-visit the idea and bring it to fruition.’'

The project is scheduled for completion before the end of 2020, and SB Motorsport hopes to display the pick-up at various events in 2021 such as the Goodwood Festival of Speed.