Revised version of the GT-R-engined compact crossover set to appear at Goodwood, with even more power than before 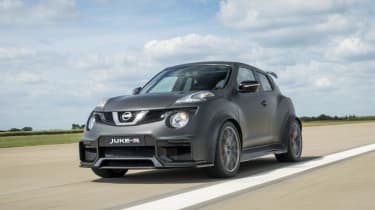 The old Nissan Juke-R was not a slow car. A skunkworks project from Nissan and RML, engineers junked the crossover’s supermini-based powertrain for the 3.8-litre, twin-turbocharged V6 and all-wheel drive system from the ballistic Nissan GT-R.

Still, there’s always room for improvement, and with 600bhp on tap the latest Juke-R 2.0 will be even more violently fast than its predecessor. The output actually makes the R more powerful than any current road-going GT-R, including the 592bhp Nismo.

Now adopting styling elements from the regular Juke, facelifted last year, the Juke-R remains as demonic to behold as its predecessor. Matt black paintwork covers the wide-arched body, which in turn blisters over ten-spoke alloy wheels like those on the road-going GT-R. 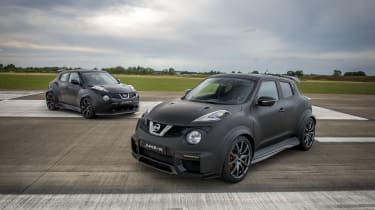 The new car also wears a different aero kit to its predecessor. A square-jawed, carbonfibre front splitter, with cooling apertures more than twice the size of those on the old car, now also incorporates daytime running lights. The side skirts now feature several aerodynamic elements and are formed from carbonfibre. At the rear there’s a deep diffuser, with twin tailpipes peeking out of carbonfibre cutouts in the rear bumper.

Gareth Dunsmore, Marketing Communications General Manager for Nissan Europe said, ‘It was the natural choice to upgrade the original Juke-R with added power and even bolder styling. The Juke-R 2.0 is a perfect “crossover” of the best bits of Nissan – real innovation showcasing our Crossover prowess fused with the excitement and of the GT-R supercar engine.’

The Juke-R 2.0 will make its public debut at this weekend’s Goodwood Festival of Speed, at the hands of Nissan racing driver Jann Mardenborough. Jann already has form at Goodwood – he currently holds the supercar record on the hill, at the wheel of a ‘time attack’ Nissan GT-R.