The Cooper S is under attack from the new breed of superminis. AC Schnitzer has the answer 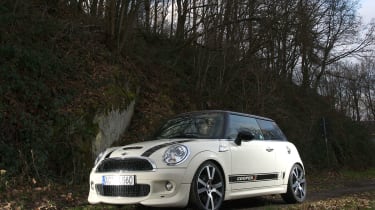 AC Schnitzer is based in Aachen, Germany (AC is the numberplate moniker for the area) and although better known for tuning BMWs it has also been turning its attention to Minis in recent times. Schnitzer is responsible for the design and set-up of its creations, but sources the parts from well-established suppliers. So the springs are Eibach, the dampers Bilstein, the exhaust Remus (like the Corsa’s) and the body parts are produced by the same supplier BMW uses, so they don’t look like they’ve been grafted on by a colour-blind art student.

Sitting in the workshop, the 25mm lower ride height, 18in wheels and front and rear spoilers certainly give the Cooper S a completely different demeanour. If you put slicks on it you’d think it was a Mini Challenge racer in prep. Schnitzer’s test driver, Manfred Wollgarten (Ring meister and possessor of that immutable cool that certain ageing racing drivers seem to have), has arranged for a standard Cooper S to join us by way of comparison. So we head out towards the autobahn for the first few miles.

And without so much as a second glance we’re sitting on the speedy side of 140mph. Perhaps it’s not such a bad thing the new Mini’s speedo is enormous… Pressing down into the tarmac, the Schnitzer feels totally stable at this speed. It shows where the extra power is as well, pulling really hard above 5000rpm even in fifth and sixth gears. If I weren’t following the standard car I’m sure the speedo needle would fight its way off the end of the register.

What’s even more impressive is the ride. You look at the Schnitzer and expect crashing discomfort from the slender-spoked wheels tucked up in the arches, yet it actually rides at least as well as the standard car. Much of this is down to the tyres, because despite being 225/35 ZR18s on each corner as opposed to 205/45 R17s on the standard car, the Schnitzer’s aren’t run-flats. Manfred reckons that in terms of ride, 18in runflats are the equivalent of standard 20in tyres.

We’re soon off the autobahn in search of more twisting roads. Following the standard Mini, I’m reminded how wrong the exhaust looks hanging down below the rear of the car. The Schnitzer’s rear valance cures this, while the new pipework adds welcome bass and burble to the soundtrack. It’s not as raucous as the Fiesta’s or Corsa’s, but that’s partly down to Germany’s strict TUV tests – they’re working on less restricted systems for other markets.

It’s not actually raining but the roads have that permanently moist winter film as we turn onto an almost alpine ribbon of tarmac twisting down to a reservoir. Nonetheless the Schnitzer S is somehow generating serious levels of grip. The gearshift is sweet and, as with the beautiful weighting of all the major controls, imbues the Mini with a level of quality that lifts it above what you expect from a hot hatch.

On this tightly coiled road, the best upgrade, an LSD, makes its presence felt, locking up and hooking the Mini’s nose out of corners so hard that the rear almost seems to drift round. It’s a much more composed car than the Works, cornering flatter and harder. There’s not quite the malleability in the dynamics, but in its place is a greater precision. The only thing the Schnitzer lacks is a brake upgrade – with 49bhp extra, it needs one.