Mini hatchback gains an extra pair of door. But have the dynamics remained intact? 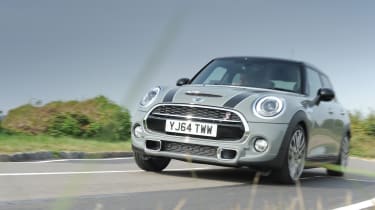 It is, to risk stating the obvious, a Mini Cooper SD with an extra pair of doors. The good news is that it's based on the hatchback, rather than the Countryman, so there's a positive straight out of the box.

The wheelbase has been extended by 72mm (but the difference this makes on rear legroom is negligible), and at 278 litres the boot is 67 litres larger than the three-door’s. For comparison, a five-door Golf has a 380-litre boot and a five-door Polo crams in 280 litres.

You sit low in the Mini, on a firm but supportive seat. You grab the chunky wheel and note the familiar exaggerated interior styling. Build quality is strong, there’s appealing weight to the controls and visibility is good. The huge circular centre display, an upsized throwback to the original Mini’s speedo, comfortably houses infotainment and satnav, but its positioning means you take your eyes off the road for longer than is comfortable to select destinations or operate the hi-fi. This can be mitigated somewhat by an optional (£375) head-up display.

It takes, oh, about 50 yards for you to recognise the familiar Mini driving DNA. The wheelbase may be longer and weight up by around 60kg, but you could drive this car blindfolded and know it’s a Mini. The steering delivers strong feel and a controlled urgency that could only be Mini, and the handling has still clearly been tuned by someone who knows how to have fun. The same small movements from the rear end are carried over from the three-door (this is resolutely not a locked-down rear axle like a Golf’s), which in turn makes for a pleasantly involving driving experience.

The SD engine – a 2-litre four-cylinder diesel – is very capable. A twin-scroll turbo pushes peak torque to a strong 265lb ft, resulting in performance that will frighten all but the quickest hot hatches. This engine is also refined, and extremely frugal. The choice between it and the petrol equivalent is not the foregone conclusion you’d imagine.

The suspension is firm – some will find it ‘sporting’, others ‘uncomfortable’. The ride is stiffer than that of the majority of this car’s rivals, but it’s rarely crashy. Tyre roar, however, can be intrusive.

Directional stability is marginally improved by the longer wheelbase. Push too hard and a well-resolved ESP system subtly keeps things in check, while an electronic diff delivers strong traction without impeding progress.

The 5-door is both a little slower and drinks a little more than its three-door equivalent, but not to the extent you'll really notice. The 5-door SD even has the same band B VED rate.

Unlike the Countryman or the Paceman, the Mini five-door still feels like a scamp. Its weightier controls, firm dynamics, overall agility and sense of fun all conspire to deliver an enjoyable drive when the mood takes. Some of the styling features are overwrought, and it’s hard not to cringe at the mood lighting and some of the signposting (select Sport mode and ‘maximum go-kart feel’ appears on the central screen), but overall the Mini five-door loses little to the three-door in terms of spirit.

The question you need to ask is whether the modest gains in overall practicality warrant choosing it over the three-door. Or in other words, how often do you carry rear-seat passengers, and how often will you fill all 278 litres in the boot?