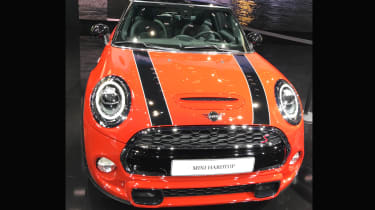 Mini’s three- and five-door hatchback and convertible have been treated to the subtlest of facelifts for 2018, appearing for the first time in the metal at the Detroit motor show. The understated design changes, mostly to incorporate new LED lights, are also matched with minor tweaks to the range of engines. However, there’s an all-new optional dual-clutch gearbox and in true Mini style, the range of cosmetic options and ways in which to personalise the supermini has grown even greater.

Some small alterations have been made to the range of engines in the Mini One, Cooper, Cooper S and John Cooper Works in this latest update. The twin-scroll turbo, ECU, oil supply, intake ducting, engine cooling and exhaust system have all been revised, but not significantly enough to make much difference to performance or efficiency.

> Read our review of the current Mini Cooper

The most significant change to any of the engines has been made to the three-cylinder motor in the Mini One, its capacity has been increased from 1.2 to 1.5-litres. The extra CC has increased torque by 7lb ft, taking the total to 140 lb ft. 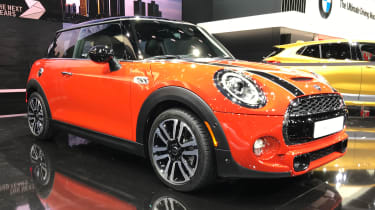 All of the engines in the hatch and convertible range now benefit from CFRP (carbonfibre reinforced plastic) engine covers, which are not only lighter than the solid plastic items they replace, but are also made from leftover material from the production of BMW’s i3 and i8.

In a departure from current trends, Mini has discarded its optional torque-converter automatic gearbox in favour of a dual-clutch transmission. This comes as BMW, Mini's parent company, has started replacing the DCT ‘box in its M-cars with conventional automatic gearboxes – the current M5 was first and rumours suggest the next M3 and M4 will have a torque-converter automatic rather than a twin-clutch too. The six-speed manual gearbox is still the standard transmission in the Mini, however.

> Find out what the new BMW M5 is like to drive

The only really noticeable visual changes to the new Mini hatch and convertible can be found in its lights. Both the front and rear lamps have been replaced with LED units as standard, an improvement over the outgoing halogen lights. As well as the new look for the light units, they also illuminate with a new DLR ring design.

Optional matrix LED front lights are now available, too. These more complex lights automatically adjust to different situations; they project a wide and low beam in urban areas when driving slowly and emit a taller and brighter light at high speeds. They also have the ability to dip automatically, too, restricting light to areas where the front camera hasn’t detected an on-coming car.

All around the new updated cars you can spot the simple, two-dimensional Mini logo that’s been part of the company’s identity on official literature and around dealerships for a couple of years. It replaces a similar, but more deeply sculpted emblem. 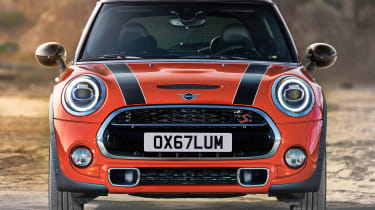 The black exterior parts can now be matched on the inside with a Piano Black trim option. The new black strip extends across the dash and is made jazzier with a back-lit Union Jack motif that changes colour depending on the chosen hue of the ambient lighting.

The Piano Black trim is part of a greater range of customisation options. Now, as well as more colours, patterns, icons and materials, buyers can add their own text to their Mini hatch and convertible. The level of personalisation has been made possible thanks to the use of 3D printing and laser engraving.

> evo played a part in developing a limited edition hardcore Mini, the Challenge, read about it here

Rather than just a greater selection of colour and trim, the interior has been treated to some new standard equipment. There’s a new multi-function steering wheel – with speed limit controls on the left and audio and phone controls on the right – and 6.5-inch colour display in the centre of the dash. 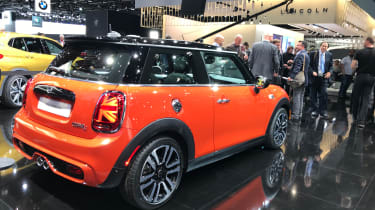 The small infotainment screen can still be updated to an 8.8-inch display of you specify the Navigation Plus package. As well as the larger screen, the pack contains wireless charging plus new MINI Connected Services including Real Time Traffic Information, new Natural Language Understanding functionality, MINI Concierge Service, online services and Apple CarPlay.