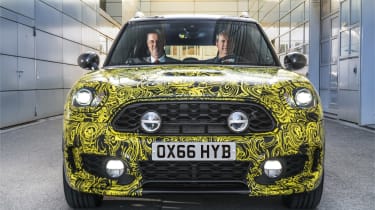 Mini has revealed a prototype of its first-ever plug-in hybrid model, to be based on the next-generation Mini Countryman, coming soon.

The camouflaged prototype doesn't reveal anything particularly unique about the new car's styling, which will be an evolution of the current model, but the car will be significant for debuting the firm's first series production electrified model.

Mini has of course dabbled with electric drivetrains before, with the Mini-E - a lease-only vehicle that was used to study how drivers use electric vehicles ahead of the launch of BMW's i brand.

As a plug-in hybrid the new electrified Countryman won't be an electric-only model, but will allow Mini drivers to travel an as-yet unspecified distance on electric power alone.

It will also allow drivers to travel relatively high speeds on electric power, according to head of Mini series management, Peter Wolf. In the standard Auto eDrive mode speeds of up to 50mph will be possible, while a Max eDrive mode will allow electric travel up to 78mph.

It's unlikely the car will be able to travel for long at this speed before the combustion engine (likely Mini's existing turbocharged, 1.5-litre three-cylinder unit) kicks in - and heavier uses of the throttle pedal will also see the engine start up, just as it does in plug-in hybrids from BMW. 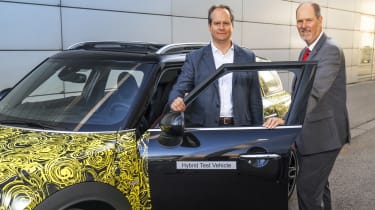 Performance should be strong though - Mini describes it as 'unparalleled acceleration performance when compared with its combustion-only siblings'.

Wolf says drivers will get a feel for the best technique after a short time, but the rest of the experience should differ little from any other automatic-transmission Mini product.

Beyond the start/stop switch glowing yellow rather than red, and the tachometer being replaced with a power display, the cabin and controls should be much as any other modern Mini. A Save Battery mode can be used to retain or build charge in the battery pack ready for city driving.

Mini is keen to stress that the car's handling won't be affected, and may even be improved in the plug-in model. With the car's battery positioned low in the chassis and towards the rear of the car, both weight distribution and the car's centre of gravity should be improved.

The new car is also all-wheel drive, with electric power being sent to the rear wheels, and combustion power to the front axle. The new plug-in model, along with more conventionally-fueled Mini Countryman versions, should go on sale next year.