We drive the all-electric Mini E. A car you can live with? Harry Metcalfe reports. 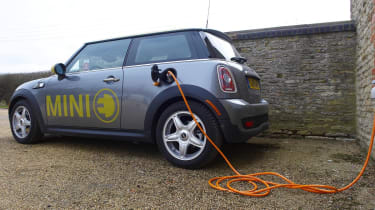 So what is it?

BMW has built 600 electric MINI prototypes for worldwide testing, and 20 of these have remained in the UK undergoing government sponsored usage trials with selected volunteers who pay £330 per month. BMW is now looking for 20 more volunteers to join the Mini E trial.

Under the bonnet you’ll find the 201bhp electric motor which powers the front wheels via a single speed gearbox. 0-62mph takes 8.5secs and top speed is limited to 95mph.

Pretty good, with one major downside; the driving experience simply doesn’t last long enough. When travelling on trunk roads at a steady speed close to the speed limit, we found the battery could run out of spark after only 55 miles. Take in a bit of stop-start motoring and the brake regeneration kicks in, helping to increase the range massively but still well short of the 120 miles Mini claims.

The driving experience itself is pure Mini; the car feels quick, especially from a standing start and the handling is very close to that of the petrol Mini. That said, the extra weight (75kg more than a Cooper S) makes itself felt when you really chuck it around.

Rivals are thin on the ground at the moment but by being Mini-shaped, at least you don’t feel like some eco warrior when out and about. But the limited range makes it far more suited to small commutes and the Tesla remains our favourite all-electric car.

The Mini E comes with a smart plug that requires a special 32amp charge point to be installed for fast charging. Unfortunately the charge point isn’t the same as the one we had installed when we ran a Tesla for a week! We also had problems charging from a conventional 13amp plug as the supply kept cutting out. As a result I had to stay very late at the office in order to get enough charge in to get home. At least the cost of a full charge is low (around £4 at current rates). However, if that’s only lasting 75 miles, it’s not much cheaper to run than a carefully driven Mini Cooper D, which claims a combined figure of 72.4mpg. Work it out at current fuel prices and each mile costs 5.3 pence in the E, 7.7 pence in the diesel.