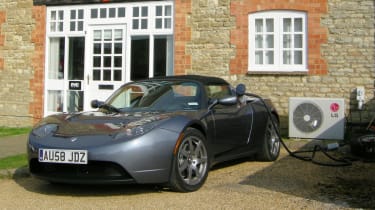 So I’m humming across country in the Tesla, top down on an early spring evening, enjoying the sensations of driving the world’s first fully fledged electric sports car, when I’m temporarily balked by a slow-moving Saxo. Now, at 40mph the Tesla really is eerily quiet. Go much faster and the tyre noise and wind roar block out most other sounds, but at this pace you can hear everything. If a badger were to fart on the verge, you’d know about it. But what I can hear right now is the soft burble of the Citroën’s exhaust and the squeaking of its suspension. It’s really quite spooky. Then the road opens up, and with a squeeze of the accelerator pedal the Tesla rushes forward and whooshes past, the muted hum and jetplane whistle rising in pitch and volume before being subsumed once again by the wind and tyre roar.

It’s my first journey in the Tesla, and I’m absolutely in its thrall. You would be too. Because being blokes we’re intrigued by new technologies. We want to experience them, want to find out whether they’re going to enhance our lives. And on a more practical level, we need to know that they actually work, which is why we’re spending a couple of days with the Tesla, just driving it between home and work and back again, getting a feel for what it would be like to live with.

The driving bit is painless. In fact it’s rather better than that. As I head home to Cambridge after the Autodrome shoot, I’m blown away first by the fact that it all just works so beautifully, then by the sheer pace of the thing and finally by the fact that it gels so well with the Lotus chassis. It might not be quite as delicate and balletically agile as an Elise, but it’s pretty damn close, and the steering’s wonderfully organic in feel – a digital engine in an analogue chassis.

But something’s nagging away at me, and it’s the tiny touch-screen display tucked away in the bottom left-hand corner of the facia. When I left Bedford it promised an ‘ideal range’ of 91 miles – more than ample for the 40-mile drive home. But with around five miles still to go it’s down to just 20 miles and warning me that the battery’s low so it’s going into reduced power mode. Hmm. When I eventually park up, it’s down to 13 miles, so that’s 78 miles worth of juice spent in around half the distance. And okay, I was driving in a spirited fashion, but hey, it’s a sports car.

What it does mean, of course, is that if Mrs Tomalin and I were planning an evening on the town, we’d have to take another car. Because the Tesla now has to be recharged for six-eight hours (if you’ve had the high-power converter socket fitted) or considerably longer if you’re running off a regular mains socket.

At least it’s a doddle to plug in, though the thick rubber snake of a cable takes up a good chunk of the bootspace when it’s stowed away. On it goes at 7.30pm, and 13 hours later (and after pumping in about four quid’s worth of electricity) the battery icon suggests it’s about three-quarters recharged, and the ‘ideal range’ has gone up to 134 miles. So it’s off to work, this time with the hood up, and as I glide past mums walking their kids to school I can actually hear snippets of conversation. Bizarre.

This time I do my regular commute – roughly 25 miles of dual carriageway and 12 or 13 more of twisty B-road. The Tesla impresses again with its pace (50-70mph is gone in a breath) and general air of integrity, but I find myself keeping half an eye on the battery indicator. Even at a 70mph cruise, I’m sure the range is ticking down faster than the miles are passing beneath my wheels. Or am I just paranoid?

Towards the end of the journey, as I whizz along a particularly fun section of backroad, I find I’m missing the business of heeling and toeing, dipping the clutch and changing gear. Didn’t expect that. I’m also pining for the sounds of a petrol engine: the fire, the soul. The spooky linearity of the Roadster’s power delivery and the jet-engine soundtrack are a novelty all right, but novelties have a habit of wearing off. By the time I arrive at work, the range has dropped by 63 miles to 71, even though I’ve actually covered just 38. It’s delivering about 60 per cent of what it promises, and this time I wasn’t even driving particularly briskly. Next day Harry Metcalfe drives the Tesla home, and gets an almost identical result.

So range remains the electric sports car’s Achilles heel. Treat every journey like an economy drive, and yes, you might see 150-180 miles. But drive it as you would, say, an Elise, and in our experience 100-120 miles is more realistic. Which, given that you might then need to spend 12 hours recharging it, isn’t very far. And you’d never dare risk going much below 20 miles (even though there’s a 30-mile ‘reserve’), because if you do run out, there’s no hitching a lift to the next garage for a gallon of electricity.

It’s a rich man’s toy, of course. And no doubt perfectly at home humming around Beverley Hills. For the rest of us, for now at least, the Tesla’s great as far as it goes. The problem is that it doesn’t go far enough…