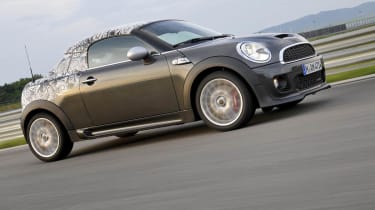 Mini has revealed details of its new Coupe. The two-door, two-seater Mini will battle the Peugeot RCZ and Audi TT when UK sales begin this autumn. And it will do so with a choice of one diesel and three petrol engines. Topping the range, and grabbing most of our attention, will be the Mini John Cooper Works Coupe. With the 1.6-litre turbocharged four-cylinder engine from the JCW hatchback, it will boast 208bhp and 192lb ft maximums (with 207lb ft available on overboost), driving the front wheels to propel the Coupe to 62mph in 6.4sec and onto a 149mph top speed. It’s a set of performance figures comparable with an Audi TT 2.0 TFSI and Peugeot RCZ THP 200, the latter’s 197bhp engine closely related to the JCW’s unit. Sensible figures of 39.8mpg and 165g/km are promised. Making up the rest of the range is the Cooper (1.6 petrol, 120bhp, 118lb ft, 52.3mpg, 127g/km), Cooper S (1.6 petrol turbo, 181bhp, 192lb ft, 48.7mpg, 136g/km) and Cooper SD (2.0 turbodiesel, 141bhp, 225lb ft, 65.7mpg, 114g/km). ‘The ultimate in go-kart handling’ is promised, so we’d expect the usual Mini traits of a firm sporty ride, snappy six-speed manual gearbox and weighty power steering. There’s technology to help control the torque steer that afflicts higher powered Minis, too, the John Cooper Works particularly. Though the excitement of trying to push over 200bhp through its front wheels is one of the JCW’s more unique thrills, so happily the system can be turned off along with the car’s other driver aids. And while there are plenty of Mini styling cues present – the lights are identical to the the Coupe’s hatchback counterpart, for instance – the car’s look dramatically changes thanks to its 29mm lower height and ‘helmet roof’, while there’s a rear spoiler that automatically extends at 50mph. Sales will begin after the Mini Coupe’s Frankfurt motor show unveiling in September. Expect prices to range from around £18,000 to £25,000, undercutting equivalent Audi TTs. An open-top Mini Roadster will follow with the same engine range in 2012.