Mini pulls the wraps off its long rumoured Countryman John Cooper Works, its priciest and most powerful car 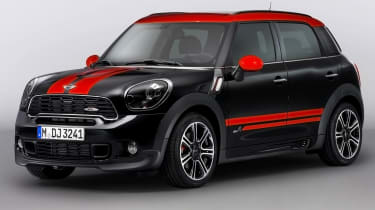 Mini’s long-rumoured Countryman John Cooper Works has been confirmed. It’s the sixth JCW model, joining the existing range of hatchback, convertible, Coupe, Roadster and Clubman, and is the most potent production Mini yet (alongside the wonderful Works GP edition). That’s thanks to a honed version of the 1.6-litre turbo petrol engine used in other Works Minis. The Countryman’s different body shape sees air intake and exhaust system tweaks, while the four-cylinder unit now boasts direct injection and variable valve timing. Maximum power and torque outputs are 215bhp and 221lb ft; up 7bhp and 15lb ft on the rest of the JCW range. A 7.0sec 0-62mph sprint and 140mph top speed are both slightly slower than the hatchback's equivalent figures. The Countryman’s other key change is, as you’d expect, a four-wheel-drive system. ALL4 uses an electromagnetic centre diff to transfer power between front and rear axles, with a 50/50 split during normal driving conditions but up to 100 per cent of shove going to the rear wheels when required. Power reaches the wheels via a six-speed manual, though this is the first JCW with the option of an automatic gearbox. Mini’s John Cooper Works sports suspension is standard fit, dropping the Countryman by 10mm as well as stiffening its springs and dampers and strengthening its anti-roll bars. Minimalism – Mini’s environmentally-minded tech – is standard too, and included brake energy regeneration and stop/start. It helps contribute to 167g/km CO2 emissions and claimed 39.2mpg fuel economy in manual-equipped cars.  The Countryman’s styling is suitably pumped up, with a more aggressive bodykit and a smattering of JCW badges, while the interior gets sports seats up front, striking ‘Chili Red’ trim and your choice of two or three rear seats. Mini Countryman John Cooper Works prices start at £27,800, making this the company’s most expensive car when sales begin in autumn 2012. The JCW makes its public debut at next week’s Geneva motor show; there’ll be live show news and video reports on evo.co.uk.