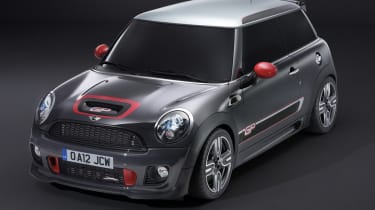 This weekend’s Mini United event has seen Mini unveil its new John Cooper Works GP. It’s the second-generation GP hot hatch, and like its 2006 forebear, comes near the end of its base model’s production run. It’s also set to be the fastest, most hardcore Mini you can buy, with race derived, adjustable suspension and a 1.6-litre turbo engine with upwards of 220bhp. Firm technical details are thin on the ground, Mini merely revealing an 8min23sec Nurburgring Nordschleife laptime. At 19sec quicker than the original Works GP, though, it hints at a power output healthier than its predecessor’s. With the current JCW’s 208bhp 1.6-litre turbo engine tuned past 250bhp elsewhere (such as in Citroen’s DS4 Racing concept), a figure somewhere north of the mk1 GP’s 215bhp will be easily attained.

The new GP is more track-focussed than the original, featuring fully adjustable race-derived suspension - with new springs and dampers - and a set of Kumho tyres that have been developed specifically for the GP. It's been thoroughly tested at the Nurburgring, as well as a fair amount of mileage on UK roads, so it shouldn't be quite as unforgiving as the original GP on the road. Styling tweaks are liberally inspired by the original GP, with Thunder Grey metallic paint and striking red detailing, four-spoke alloy wheels and a carbon fibre rear spoiler mounted on the hatchback. This is just part of the aerodynamic package, which features a sealed underbody, said to create genuine downforce.

The new John Cooper Works GP ditches the regular Mini’s rear seats, like its 2006 predecessor, with a strut-brace in its place. The front seats have been replaced with a pair of light-weight Recaros, to complement the other weight-saving measures – the original cutting 40kg over a regular Cooper S. The 2012 Mini John Cooper Works GP goes on sale later this year, with its bespoke mechanicals likely resulting in a price tag approaching £30,000. Just 2000 will be made. evo is at Mini United 2012, held at Circuit Paul Ricard in France. Keep your eyes on evo.co.uk for a gallery of images and a report from the event. You can also read a review of the original Mini Cooper S Works GP.