Mini has reworked the 1.6-litre turbocharged engine in the JCW range. It's now considerably more efficient - without sacrificing any power 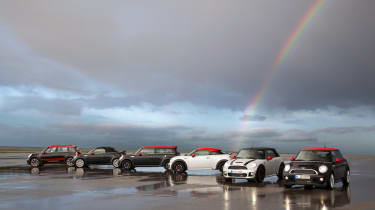 Mini’s latest John Cooper Works engine is a direct development of the previous 1.6-litre turbocharged engine, and while retaining identical power and torque figures, fuel economy has been significantly improved by making various improvements to the engine.

Thanks to a number of changes to the engine, power and torque remains at a healthy 208bhp (215bhp for the Countryman) and 192lb ft, while average fuel consumption has been improved from 39.8mpg to a claimed 42.8mpg along with reduced CO2 emissions, which have been cut from 165g/km to 153g/km.

Various technological advances have been made over the previous engine, including a version of BMW’s Valvetronic system, direct injection and specifically for JCW cars, reinforced pistons, a high-strength cylinder head and sodium-filled (lightweight) exhaust valves.

This coincides with the introduction of a new six-speed automatic transmission, which is now available on all the different JCWs. Fitting the automatic ‘box (with steptronic function) adds an extra 0.2 seconds to 62mph, and adds and extra 12g/km onto the CO2 emissions.

All Mini JCWs are now equipped with ‘Minimalism’ – Mini’s new fuel-saving tech - as standard. This includes stop-start, a regenerative braking system, a new electric steering set-up and a gearshift indicator.