Mini's fastest ever car is revealed, and the 150mph John Cooper Works GP has some pretty serious upgrades 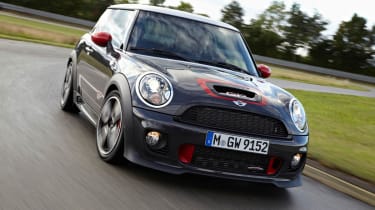 Meet Mini’s fastest ever car. Further technical details of the second-generation John Cooper Works GP have been released, and it’s set to be a very focused hot hatch.

It uses the 1.6-litre turbo four engine familiar to drivers of other current fast Minis, and it’s tuned modestly, power rising 7bhp over the regular JCW to 215bhp. That puts the mk2 GP on par with its mk1 predecessor. Its 206lb ft torque figure is unchanged from the standard Works, though the 1160kg GP is slightly quicker, boasting a 150mph top speed and 6.3sec sprint to 62mph. At 8min23sec, its Nurburgring lap time is 18sec quicker than the previous GP and just 6sec off the pace of the Renaultsport Megane R26.R.

Most of the development, then, has gone into the chassis. There’s individually adjustable coilover suspension, which can lower the GP’s ride height by up to 20mm, and the front dampers are mounted upside down, increasing stiffness. Front and rear cambers have also been increased, and there’s a set of bespoke Kumho Ecsta tyres.

The traction control system has enjoyed a refresh, too; a ‘GP racing’ mode utilises the Mini’s electronic faux-differential and brakes the inside wheel during especially committed cornering, no longer cutting engine power, something the standard JCW’s keen DSC is too eager to do. The brakes are upgraded, with six-piston fixed-calipers up front and 330mm front discs, 280mm rears.

The mk2 GP follows a very similar styling path to its 2006 forebear, with bold four-spoke alloy wheels, a model-unique rear spoiler and a grey and red colour scheme. Likewise inside, where the rear seats are once again replaced by a strut brace and a pair of lightweight Recaros sit up front.