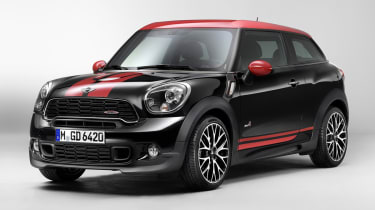 Mini’s hot John Cooper Works range has grown to seven models with the unveiling of the new Paceman iteration. As predicted – and like its standard Paceman siblings – it shares its powertrain with the equivalent Countryman.

Full 2013 Detroit motor show coverage here That means a 215bhp/221lb ft 1.6-litre turbocharged petrol engine driving all four wheels via Mini’s ALL4 transmission. A six-speed manual gearbox is standard fit, while a six-speed ‘Steptronic’ automatic is optional and comes equipped with steering wheel-mounted paddles. Their performance is near identical, both cars hitting 62mph in 6.9sec, while just 1mph separates their top speeds, the manual edging it with 140mph. That makes the Paceman 10mph slower than Mini’s fastest JCW – the GP hatchback – and 0.6sec tardier sprinting to 62mph, hinting at the extra bulk it carries. It differs from regular Pacemans thanks to 10mm-lower sports suspension, a sports exhaust and a more aggressive styling package, including very bold 18in alloy wheels. The stability control also gets a more fun-friendly DTC mode. Helpful, as when subjected to suitably aggressive conditions, as much as 100 per cent of the Paceman’s power can be sent to the rear wheels. The Paceman JCW’s interior is suitably bold, too, with only two rear seats and the option of some eye-searing red details. Brake energy recuperation and stop/start technology help contribute to 172g/km CO2 emissions and a 38.2mpg claimed average. The Mini Paceman John Cooper Works will debut at the 2013 Detroit motor show in January, before sales start in March 2013. Expect to pay around £29,500 for the manual, with the automatic set to be the first regular production Mini to top £30k.