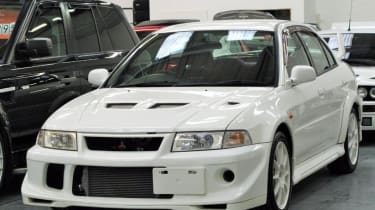 This year's evo Car of the year battle once again comprises - as you'll discover over the course of the next week or so - an eclectic collection of vehicles, from hot hatches all the way up to supercars.

But there is one category of vehicle we've seen slowly slip away over the years when it was once a regular feature in our yearly test: the turbocharged, rally-inspired homologation special.

To be fair, there were only ever two significant vehicles, always offering more power or a more intense, raw driving experience than its predecessor. Those cars were the Subaru Impreza and Mitsubishi Lancer Evolution, and they were once as regular a feature in the magazine as a Renault Sport product, a 911, or a BMW M car is today.

The two often traded blows and group test wins, but the competition was never fiercer, nor the cars ever more appealing than it was in the very late 1990s. For the Impreza, this period was defined by the wide-arched, two-door 22B. For the Lancer, it was the Evolution VI Tommi Makinen Edition.

You'll win no prizes from us for guessing the meaning behind the name, but the car was the ultimate incarnation of perhaps the most appealing generation of Lancer Evolution.

As standard its 1997cc turbocharged inline-four made a Japanese government-pleasing 276bhp (at 6500rpm) and 275lb ft of torque from 2750rpm. With a kerb weight of 1365kg it makes the 1547kg Ford Focus RS look obese, and sure enough the lithe Mitsubishi, despite now being 17 years old, trims a tenth from the RS's 4.7sec 0-62mph time. 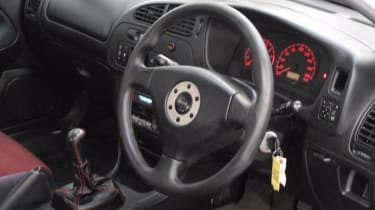 And this should go without saying, but the Lancer knocks the flabby Focus clean off the rally stage for looks. It's not a pretty car by any stretch but few look more purposeful, and the Evo VI fulfilled that purpose by helping its Finnish star driver to his fourth World Rally Championship in 1999. Beats Ken Block doing "drift mode"-assisted donuts in a car park.

While values haven't risen in quite the same way as the 22B, you could almost call the Makinen a depreciation-proof car. Back in 2009 (evo 128) we gave the Makinen a "price now" value of £12,000. Today, we've found an example for sale at WR Cars in Bradford (via Classic and Performance Car) for sale for £10,995.

You'll notice immediately that it doesn't have the desirable red colour scheme with white and black stripes, like Tommi's full-fat rally car of the era. But it is a genuine Makinen, imported fresh from Japan and bearing the "T. Makinen" stitching in the black and red Recaros.

It has the proper 17-inch (sounds tiny these days) ten-spoke Enkei alloy wheels too - in white, naturally - and looks temptingly tidy for a car with 92,000 miles on the clock.

The insipid paintwork is a bit disappointing, but reading Henry Catchpole's words from that issue might make up for that. 'The steering has bundles of feel but is light and seems to twitch the nose of the car into corners almost unnaturally fast at first,' he wrote. 'You just can't help but get on the throttle earlier and earlier, revelling in the way the chassis adjusts its balance under power, making the rear wheels ease round to follow the fronts.'

The Focus RS behaves similarly, admittedly - but we do find ourselves missing Mitsubishi and Subaru's finest work from our annual tests. It may be a long time before either returns.