Morgan has released a new teaser image and a video of its forthcoming supercar, set to arrive at the Geneva motor show in March. As the video reveals, the car will feature the British marque’s BMW-sourced V8.

The new model follows the Plus 8 Speedster, which arrived in 2014 with a 362bhp V8. We can expect Morgan’s new arrival to produce even more power given its supercar label.

The latest teaser image via the firm's Facebook page also confirmed the car will wear Morgan’s traditional exterior body styling, bearing most resemblance with the Aero 8 sports car (read the Aero 8 buying guide here). That car ceased production in 2010, so there's long been a space for a focused high performance Morgan.

Aside from visual confirmation that the supercar will be trimmed in the usual raft of hand-stitched leathers, little else is known about the new car. Check back here on the 3 March to see the car in its full glory. 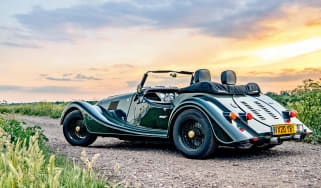