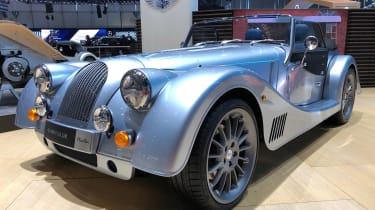 No doubt Morgan aficionados will notice the subtle differences to the models that have preceeded it but this all-new Morgan Plus Six heralds a new dawn for the company with a new chassis, new running gear and a bold future.

Underpinning the Plus Six is Morgan’s new CX-Generation bonded aluminium platform – a reference to the firm's 110th anniversary – and a promise from Morgan that this will be the most dynamically capable model the company has ever made.

The new Plus Six retains the unmistakable Morgan silhouette and traditional styling but underneath lies an aluminium bonded platform mated to the latest BMW running gear.

Thanks to a dry weight of just 1075kg the Plus Six’s claimed performance is impressive with 0-62mph coming up in just 4.2sec with a top speed of 165mph. Power is transmitted via an eight-speed ZF automatic gearbox with Sport, Plus and Manual modes with the capability of manual shifting either via the gear lever or steering wheel mounted paddles. 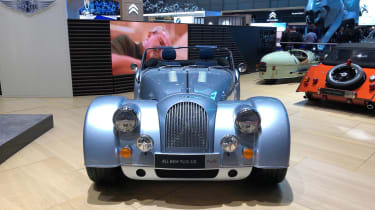 The CX-Generation platform is formed from bonded aluminium and Morgan says it’s lighter as well as being 100 per cent stiffer than the previous generation chassis. It features a wheelbase that’s grown by 20mm but Morgan claims it now offers an additional 200mm of leg space plus a 31 per cent increase in stowage space, too. Retaining the traditional Morgan coachbuilding tradition the Plus Six features an ash frame that sits on top of the chassis which Morgan says is now thicker for increased strength.

Suspension is via MacPherson struts up front and a multi-link set up at the rear with an anti-roll bar at the front. Morgan says it has fine-tuned the suspension for a variety of driving conditions and styles being comfortable and compliant yet at the same time offering high-speed stability during fast cornering.

Inside it’s a mixture of traditional and modern with a new centre console that runs from front to rear while newly designed instruments adorn the dash that Morgan says take their inspiration from 1950s aviation instrumentation. The doors hide modern impact protection as well as a set of speakers while the Plus Six also features newly designed seats that are lighter and stiffer than before. As ever, Morgan will offer owners a plethora of personalisation options, too. 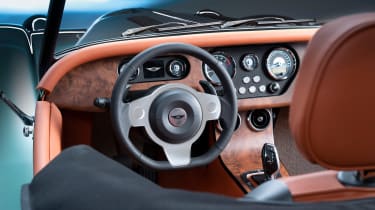 As well as featuring a new chassis and engine combination the Plus Six will also feature many items that would previously have been an anathema to most Morgan customers. There’s an LCD screen in the dashpod, automatic headlights and even options such as puddle lights and a lightweight composite hard top.

...and new investment too

Along with the debut of the Plus Six, Morgan also confirmed in Geneva that it is benefitting from a fresh round of investment that will allow it to focus on its future.

Invest Industrial, a company that has previously backed Aston Martin Lagona, Ducati, and TWR, will become Morgan's majority shareholder with the new investment, but the Morgan family will continue as shareholders, and the firm is dedicated to remaining a family brand.

It's certainly good news for Morgan's future, with plans to update the Malvern facility, hire new staff at home and abroad, and increase its spend on sales and marketing. New model development is also part of the plan – so the Plus Six won't be the last we hear of Morgan in the coming years.