Radical sets the Nürburgring lap record in an SR8LM sports car, with the help of evo 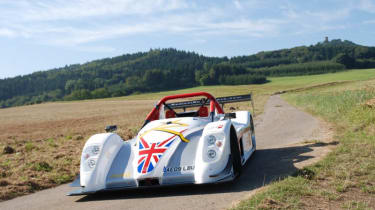 Not even a day has passed since Gumpert was parading its apparent Nürburgring record, yet its unofficial sparring partner for such honours has already responded.

British sports car firm Radical has emerged from the Nordschleife with a time of 6m48s, and evo Magazine was there to oversee it having joined the company’s team to help out with the record attempt.

The road-legal SR8LM that set the time was piloted by Michael Vergers, a racing driver who’s competed in Le Mans Series and Formula Fords, among others.

‘The car was great, I could push really hard and it felt clearly faster than the previous SR8 in 2005,’ said Vergers. ‘It’s fantastic that we’ve beaten the record; hopefully I’ll get an opportunity to return with Radical in the future.’

Radical and Vergers already lay claim to a 6m55s lap in an SR8 (see evo’s video of that here), which Gumpert hasn’t acknowledged in its trumpeting this week, perhaps discounting the SR8’s road-going production car status.

Radical co-founder Mick Hyde is keen to defend his car’s patch, the SR8LM having been driven from the UK to the Ring the day before the record lap - ‘We’ve proved that the SR8LM is not only the world’s best trackday car, but it’s also practical enough to drive to and from the circuit. It is a genuine production sportscar, with genuine performance credentials, as we’ve shown today.’

The November 2009 issue of evo Magazine will feature more details of Radical’s record.

Want to join us for a trip to the Ring? Click here...