Infiniti reveals its Etherea concept, which hints at a Lexus CT200h and BMW 1-series hatchback rival 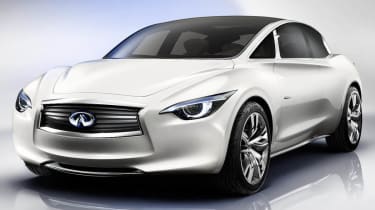 Infiniti has released initial images of its concept car to be unveiled at March’s 2011 Geneva motor show. The concept is designed to preview how an entry-level Infiniti could look and would be aimed in the direction of the Lexus CT200h and BMW 1-Series.             The unusually named Infiniti Etherea features a distinctive profile, with a curved roofline running the length of the car from the A-pillars.  According to Infiniti the car will be a ‘new type of luxury for younger buyers’.            Few details have surfaced about the Etherea, however it is thought the dimensions are similar to those of key premium compact rivals, with Infiniti promising a new mechanical layout (expect a petrol-electric hybrid drivetrain) and innovative access arrangements, though we’re still betting on getting in through doors in the usual places.             There’ll be more news following the debut of the Infiniti Etherea at Geneva on Tuesday March 1, and evo.co.uk will be there live.