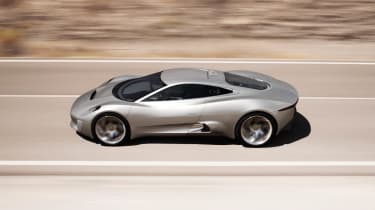 Jaguar will make its stunning C-X75. The hybrid supercar concept was unveiled at the 2010 Paris motor show, and combined 968bhp and 1180lb ft maximums and a 205mph top speed with 28g/km CO2 emissions, a figure that’s less than a third of the cleanest cars you can currently buy.

Firm details of its powertrain haven’t been released yet, but the concept car’s jet propulsion could appear in handful of C-X75s, the majority set to use a petrol-electric hybrid system that powers all four wheels. A groundbreaking tie-up with the Williams F1 team to produce the car could lead to the engine being closely related to the turbocharged 1.6-litre four-cylinder that’s due for use in Formula 1 cars from 2013. ‘Direct technology transfer from top-level motorsport’ is promised.

Jaguar’s investment in Bladon Jets, the British company who produced the micro-turbine technology seen in the concept, should see the technology used in a future Jaguar models as well as, hopefully, a small section of the C-X75 production run.

It will be designed, engineered and built in Britain, with 250 being made. Fifty of them are set to be racing versions. Production cars will cost between £700,000 and £900,000, making it a smidge cheaper than a Bugatti Veyron or Aston Martin One-77. Sales are set to begin in 2013.Click here for more Jaguar C-X75 news and pictures