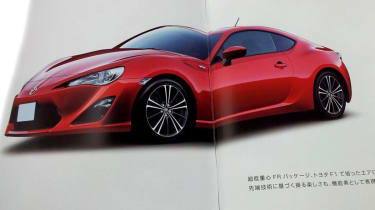 The production-spec Toyota FT-86 coupe appears to have leaked. Pictures of its exterior and interior have appeared online, having seemingly been snapped from a brochure of Toyota’s Modellista parts department. The pictures show a car that’s broadly the same as the FT-86 and FT-86 II concepts that have been seen at recent motor shows. Changes appear to have taken place at the rear, with thin, Lexus LFA-style light clusters being replaced by less distinctive units. The rear diffuser looks less dramatic, while there’s an absence of the most recent concept’s bootlid spoiler. The wheels and some of the detailing on the leaked pictures could change come production time; being from a parts catalogue, it’s likely the white car you see here isn’t 100 per cent standard. The red car - pictures of which leaked a few days after the first images - is likely to be the production FT-86 in standard showroom trim. Inside, there’s a nicely stubby gearstick, which might suggest a lovely short-throw gearchange for what we expect to be a six-speed manual transmission, though less excitingly the black trimmed gear knob sits beside the tell-tale ‘P-R-N-D’ gait of an automatic. Fingers crossed this is an option, or not for the European market, as the FT-86’s modestly powered front-engine/rear-drive purity is very appealing, and any sideways antics akin to its Corolla AE86 ancestor will be best suited to a stick-shift. Toyota hasn’t commented on the images, and the FT-86’s long gestation period continues. Should these be leaked images of the showroom-ready car, here’s hoping it nudges Toyota and Subaru to finally reveal their budget rear-drive coupes in finished form. We can’t wait to try them.