After a successful test session, Toyota is 'ready for Le Mans' with its experimental petrol-electric hybrid racer 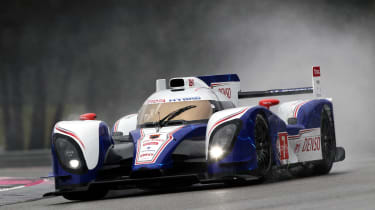 Toyota is back at Le Mans after a mere 13-year gap, and the team behind the new Hybrid TS030 is confident in the ability of its car after a successful test day at the Citrcuit de la Sarthe – running about a second a lap slower than the new Audi R18 e-tron.

The TS030 has been developed by Toyota Motorsport in Germany, with the new hybrid drivetrain coming from Toyota’s motorsport division in Higashifuji, Japan. The motor is mounted in the gearbox casing.

Audi's top car, the R18 e-tron ran a fastest lap of 3:25.927, with the quickest Toyota just over a second off the pace with 3:27.204. Lap times are obviously just a minor aspect of the mighty race, and there are many more important factors - including fuel efficiency, tyre wear and of course reliability.

Le Mans 24 Hours runs on the 16-17 June, and will be the first time in over five years that Audi won’t have competition from its former rival Peugeot, after the team pulled out of endurance racing earlier this year.