With recent regulation changes allowing Hybrids, Toyota will be entering the Le Mans 24-hour race with its new TS030 racer 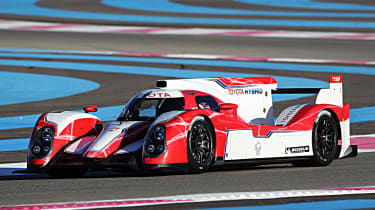 Just a few days after Peugeot's announcement that the team will no longer compete in any form of endurance racing, Toyota has released details about its planned assault on the legendary French endurance race.

The Japanese team will be running two of it's new TS030 Hybrid racing cars, first at the Six Hours of Spa on 5 May, and then at Le Mans 24 Hours on 16-17 June. Experienced F1 drivers Alex Wurz and Kazuki Nakajima have both been confirmed for the team, as well as Nicolas Lapierre, ex-Peugeot endurance racer.

Toyota's TS030 is the first FIA approved LMP1 endurance racer to use a hybrid system of any kind. The THS-R (Toyota Hybrid System - Racing) powertrain centres around an all-new 3.4-litre petrol V8, with two possible options still a possibility for the hybrid drive system.

Successor to the TS010 and TS020, which both competed at Le Mans during the '90s, the TS030 is is built on an all-new carbon fibre LMP1 chassis produced at TMG, where the complete car was assembled for the first time.

Yoshiaki Kinoshita, Team President commented: 'Of course we would love to win Le Mans; that is the dream for all competitors in this race. But we are realistic and we know we need to develop and to learn in order to compete with some very strong competition. Our target this year is to show the performance level of our car and particularly the THS-R powertrain.'

The car ran for a number of hours covering a few hundred miles at Paul Riccard, its first proper test, and the car demonstrated that the TS030 is fundamentally reliable. However, Toyota fully admits that the car will need a lot of development before its first outing at Spa, but hopes the car will be competitive and most of all reliable.