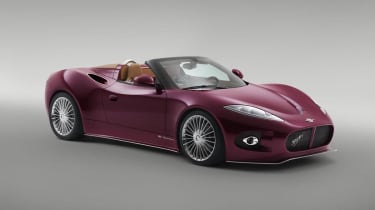 Spyker has revealed a new convertible version of the B6 Venator, called the Spyder, at The Quail event in Pebble Beach. The new concept will pave the way for a production model in 2014, powered by a mid-mounted 375bhp V6. This will be the most affordable Spyker model to date, and is aimed squarely at Porsche 911 buyers.

The Dutch supercar maker – recently known for its attempt to save the dying Saab brand – first unveiled the mid-engined sportscar in coupe form at the 2013 Geneva motor show.

It’s built around a custom carbon fibre body, and Victor Muller – the CEO of Spyker – penned the design. It features many of Spyker’s trademark features, such as the large mash front grille and aircraft-inspired glass canopy roof.

At the rear, the B6 gets twin LED light clusters, and a distinctive brake light strip along the lip of the rear panel. Inside the cabin, it’s all leather and brushed aluminium, in a very similar style to previous Spykers.

The carbon fibre body is underpinned by an aluminium monocoque structure, meaning the car tips the scales at below 1400kg. The engine will be hooked up to a conventional six-speed automatic.

Although this show car is officially just a concept, the B6 is expected to go on sale in 2014 in Europe, Asia and the Middle East, with US sales following later in 2015. Muller suggested that the market was crying out for a more-affordable Spyker model at Geneva, and US prices have been pegged at 150,000 dollars, or around £95,000 in the UK.