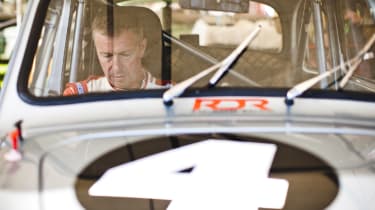 If you’ve ever wondered whether racing drivers do their job for the money or for the love of the sport, the Goodwood Revival is perfect evidence of the latter.

When presented with legendary cars from the 1950s and 1960s – neither as fast, nor as safe as the vehicles they drive in modern series – even the stoniest of racers goes weak at the knees.

The St Mary’s Trophy is always a star attraction at the Goodwood Revival, and this year the historic touring car event is littered with stars from the sport’s modern era.

Rivals Jason Plato and Matt Neal will be rivals at Goodwood too – the former will race a 1964 Morris Mini Cooper S with TV chef James Martin, while the Honda driver will replace his Civic for a Ford Lotus Cortina, co-owned and co-driven with teammate Gordon Shedden.

All three have been BTCC champions in recent years, but another champion, Andrew Jordan, will share another Lotus Cortina with his father Mike. Steve Soper will take the wheel of another Cortina.

Andy Priaulx won the World Touring Car championship in 2005, 2006 and 2007, and this year drives for his favoured BMW team in the British series. In the St Mary’s Trophy, the Guernsey-born racer will again race with BMW, in a historic BMW 1800 TiSA. Jackie Oliver and Darren Turner will race similar BMWs.

Priaulx’s regular teammate, Sam Tordoff, will line up against him in a Fiat Abarth 1500S.

We spoke to Tiff Needell in evo 202 after last year’s Revival. A BTCC winner in a Sierra RS500 at Donington in 1989, Needell will hopefully avoid last year’s brake issues in this year’s Jaguar Mk2. Le Mans winner and BTCC winner in 2000, Tom Kristensen, will compete in a Ford Fairlane Thunderbolt.

The rest of the lineup is, as ever, a who’s-who of racing – variously competing in the St. Mary’s, RAC Tourist Trophy and Lavant Cup are Jochen Mass, Emanuele Pirro, Patrick Watts, Andy Wallace and Derek Bell.

The 2015 Goodwood Revival takes place at the Goodwood Motor Circuit on September 11-13.