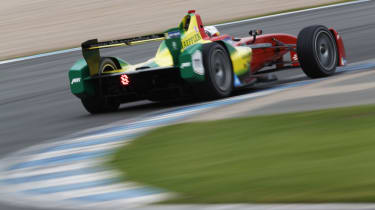 Buemi's day one time of 1:32.092 seconds put him only a second down on his best time from pre-season testing last year, highlighting the potential of the e.dams Renault car. Another e.dams driver, Nicolas Prost, set third fastest time. Second went to the ABT Schaeffler Audi Sport car of Lucas di Grassi.

Last season, teams competed exclusively in Spark-Renault vehicles, but this season, independently-developed powertrains will add an extra dimension to the racing.

It’s part of a gradual move to teams in the series eventually using their own car designs. In the meantime, the commonality of chassis helps keep costs down and has enabled the series to start much sooner than it might have had all teams contested their own vehicles from the start.

Ten teams will compete in 2015-2016, eight of which will use their own powertrains. Of those sharing drivetrains, Dragon Racing will partner with French manufacturer Venturi, while Team Aguri will keep the SRT01-e setup from last season.

The Canadian driver has signed for the Venturi team, alongside Stephane Sarrazin. Villeneuve may take some time to get used to the new car, and set a time of 1:38.176 around Donington’s twists and turns. 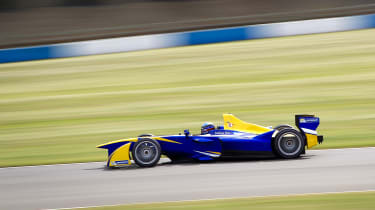 Testing continues to go well for Buemi, setting a new Formula E lap record on the second day of testing: 1:31.050.

For reference, the Formula E lap record is around 0.7sec faster than that of a Formula Ford, though the electric racers still trail Formula 3 cars by around three seconds.

Buemi described the lap as a bit 'scrappy', adding 'I think we could go a second quicker, maybe even into the 1m29s'. Nevertheless, he says the car is improving over last year's model, with better brakes and better stability, and it's easier to drive too.

Sam Bird set the second fastest time, 0.419sec behind and beating Buemi's day one lap. Third on day 2 was Daniel Abt, Lucas di Grassi's teammate in the ABT Schaeffler Audi Sport squad.

It's clear that this season will see a step-up in pace from the Formula E runners, as Daniel Abt set yet another new Formula E lap record in day three of testing.

Using full 200kW qualifying power, Abt set a lap of 1:30.250, almost a second quicker than Buemi's time from day 2 and almost two seconds quicker than the pace on the opening day of testing.

'When Buemi said that a 1:29s was possible last week that really motivated me,' explained the Abt Schaeffler driver. 'There was no stopping on track and that’s the main thing. That meant I could just drive and performance-wise we were really good.'

Prost set the second quickest time of the day, despite being unhappy with the car's balance, while Briton Sam Bird took his DS Virgin car to third place. Buemi suffered technical issues that left him back in tenth place.

Making progress was Jacques Villeneuve, whose fifth place in the Venturi was only 0.943sec shy of Abt's front-running time and nearly half a second quicker than his teammate, Stephane Sarrazin.

With Buemi and Abt suggesting a 1:29 lap around Donington was possible, it was only a matter of time before a driver dipped into those times.

Neither was the first to do so, however - that honour fell to Abt's teammate, Lucas di Grassi, who set a 1:29.920 on the fourth day of Formula E testing - once again setting a new lap record for the series.

The time was set using the full 200kW qualifying power, but di Grassi suggests the time was less important than the car's reliability. 'Of course working on the performance is important, but we know that performance here doesn’t necessarily translate to what we will see at the other tracks,' he said after setting the time.

Buemi was next quickest, also highlighting the importance of reliability - the Swiss driver and his French team spent most of the day working on race simulations at 150kW of power. Mahindra driver Bruno Senna snuck into third place, three quarters of a second behind di Grassi.

With China fast approaching, there is still much to be done for the Trulli and Andretti teams. Neither set a time on the fourth day of testing, and neither Trulli car even made it onto the track.

The teams have just two more test days at Donington, on August 24 and 25, before heading to Beijing for October 17. From there the series heads to Malaysia, Uruguay and Argentina. Round five is yet to be confirmed, but on April 2, 2016 the series returns to Long Beach in California, before heading to Paris, Berlin, Moscow and London.