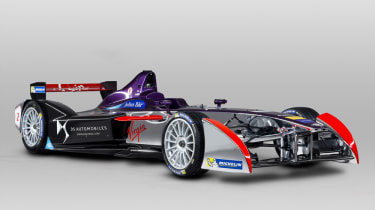 The move come as DS makes its first foray into motorsport with the DS Virgin Racing team in the 2015-2016 Formula E season.

The team’s work is representative of a series whose technical regulations are steadily relaxing. The aim is to encourage teams to entirely design and develop their own cars as the series gains traction. In its first season, all teams used cars designed by Spark-Renault and powered by a Renault drivetrain.

Testing is currently underway at Donington Park, where drivers Sam Bird and Jean-Eric Vergne have been setting competitive times in their DSV-01 as the lap records tumble.

‘I am very proud that DS has called on us to succeed in the new challenge of developing the DSV-01’ he said. ‘We are going to support DS Virgin Racing and work together from Beijing to London to add motor sport success to the DS brand’s accomplishments.’

You can read more about Formula E testing at Donington Park here.