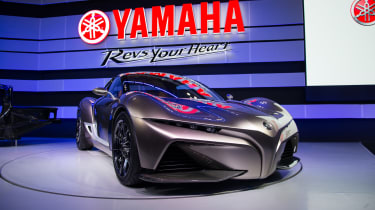 Yamaha has revealed its vision of a lightweight, two-seater sports car at the Tokyo motor show – and sitting underneath it is technology from Gordon Murray Design.

As we predicted prior to the show, Yamaha’s latest concept vehicle is also the latest to use Murray’s pioneering iStream construction technology, first previewed on the Motiv city car.

The technology allows a series of vehicles to be constructed using similar methods, regardless of their market sector. It involves using tubular subframes and composite body panels, and in the Sports Ride Concept’s case, the composite is carbonfibre.

In reality, the process could be used for anything – and Yamaha also hints that an SUV-type model would be possible. 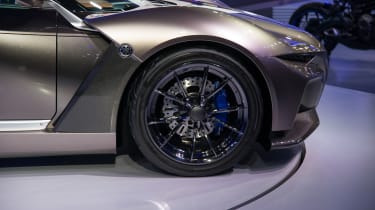 Unfortunately, further details on the Sports Ride Concept are slim, but the car takes the form of a mid-engined, two-seater sports car in the vein of the Alfa Romeo 4C and Lotus Elise.

Yamaha says the car draws from the firm’s experience of creating other ‘mobility products’, but motorcycles are clearly the main inspiration, with a lithe exterior and pared-back (yet well-finished) cabin.

Styling is a unique proposition, though we can see some similarities in the Sports Ride’s front end to recent Toyota concept cars. It’s compact though, appearing little larger, if at all, than an Alfa Romeo 4C. 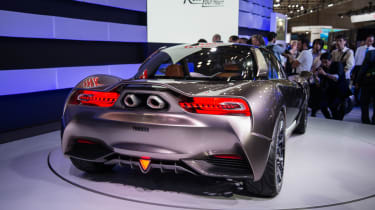 Yamaha isn’t new to the automotive sector. A former engine supplier to Formula 1 teams, the manufacturer nearly produced its own F1-engined supercar called the OX99-11 in 1994. But Japan’s economic crisis halted that project, and the firm remains best known for its production motorbikes and MotoGP racing.

This new car - and the Motiv that came before it - suggests Yamaha is experimenting with the idea of re-entering the car industry in the near future. Will the Sports Ride Concept remain a demonstrator of Yamaha’s technology or could it in fact preview a future model?