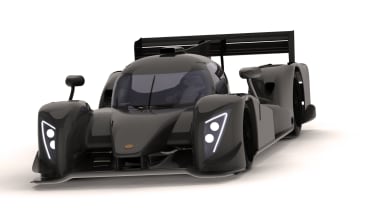 Ginetta has revealed a new prototype racing car called the G57. The Leeds based manufacturer’s new model sits atop its current range, and is set to debut in several global sports car series next year.

Under the skin of the G57 is a carbonfibre monocoque, complete with a carbon crash structure and FIA-approved steel roll cage. Behind the moncoque sits a Chevrolet sourced LS3 6.2-litre V8 that sends a peak output of 580bhp to the rear wheels via an Xtrac six-speed sequential transaxle.

Fans of the European Le Mans Series might notice that the G57’s exterior appears similar to that of the LMP3 championship winning Ginetta-Nissan. This is no coincidence – aerodynamic and chassis know how learned during Ginetta’s successful 2015 campaign has been applied to the G57, though less restrictive regulations mean a more aggressive aerodynamic setup can be run. 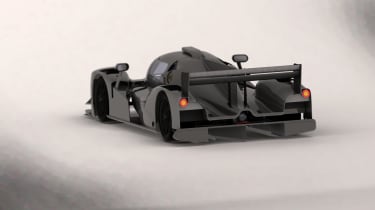 This means the G57’s performance is more comparable to the likes of LMP2 cars, though it hasn’t been built to conform to that class’s regulations. Instead, the new prototype is destined to go racing in other sports car categories – it’s already been approved for many championships, including France’s VdeV series.

Ginetta’s successful 2015 ELMS campaign will have certainly helped bolster its image as a leading prototype racing car builder. It says the G57 is hoped to boost export sales, which currently account for 50 per cent of all sales.

Lawrence Tomlinson, Chairman of Ginetta commented: ‘The European Le Mans Series provided the perfect platform to further introduce the Ginetta brand to the European marketplace, and we worked closely with the ACO to ensure both the car and the series was a success. As a business, we must now continue towards our goal of increasing export, which inevitably means creating a new, and significantly faster, car which is eligible for competition on a number of different global platforms.’

Privately run Ginetta-Nissan LMP3 cars will continue to receive factory support from Ginetta through 2016, but no further development for the car is planned. Instead, Ginetta’s focus will turn to the G57, which makes its racing debut in 2016.