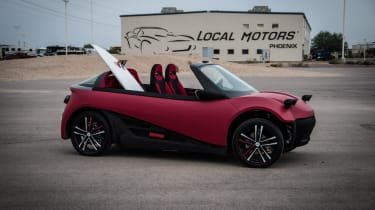 We’re still early in the life of 3D printing, but some companies have already begun to explore the potential of creating complex objects using the layer-by-layer technique.

One of those is American firm Local Motors, best-known for the crowdfunded Rally Fighter off-road activity vehicle.

For the past few years, Local Motors has been using 3D-printing technology to create entire cars. While each vehicle has so far been experimental, Local Motors’ latest concept moves another step towards homologated production models.

Called the LM3D Swim and brought about using a dechnique called direct digital manufacturing (DDM), its latest concept is once again the subject of crowdfunding design and ideas – the design, penned by community member Kevin Lo, was chosen by community votes and a judging panel including petrolhead and talk show host Jay Leno.

From concept to prototyping the entire process has taken just a few months, resulting in the beach buggy-style vehicle seen here. While the car itself may not appeal to evo readers, it’s an indication of just how individual a 3D-printed vehicle could be – while powertrain and mechanical components are a limiting factor, little limits the design of the vehicle itself.

It’s a technique that’s progressing quickly. At last year’s SEMA show in Las Vegas, Local Motors printed its first concept vehicle live at the show. By 2016, it should have a series of production-ready vehicles to join the LM3D Swim, and plans to pursue the relevant crash testing and certification standards necessary for sales in the US.

Should all go to plan, deliveries would commence in 2017, while Local Motors has even divulged a targeted manufacturer’s retail price of $53,000 for the cars – ultimately, the price would be the same across the board, regardless of the exterior design.

‘In the past few months our engineers have moved from only a rendering to the car you see in front of you today. We are using the power of DDM to create new vehicles at a pace unparalleled in the auto industry, and we’re thrilled to begin taking orders on 3D-printed cars next year,’ said Local Motors CEO Jay Rogers at the SEMA show in Las Vegas.