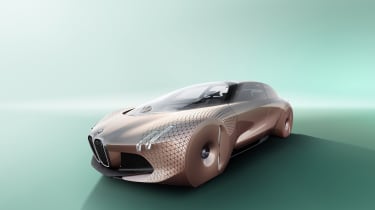 BMW is 100 years old today – and to celebrate, it’s presented a new concept to preview some ideas that might appear in the firm’s cars during the next 100 years.

It’s based on a scenario created by BMW to describe its future vehicles: effortless, comprehensively-available premium mobility tailored to each customer’s individual preferences.

BMW Vision Next 100 is the answer to this scenario, containing traditional BMW characteristics like a sporty profile, elegance and driving dynamics with elements we’re more likely to see in the future: autonomous capabilities, connectivity and high levels of customisation.

Where modes like Eco Pro and Sport will be familiar to existing BMW drivers, functions such as Boost and Ease are what future BMW drivers may have to get used to. Both are part of ‘Alive Geometry’, which manages driver-vehicle interactions. 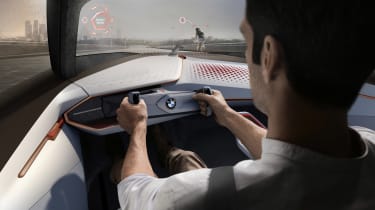 Ease mode isn’t dissimilar to the i Vision Future Interaction Concept shown at CES. In that car, driver and passenger seats swivel slightly toward each other in autonomous driving to make for more natural conversation. The Vision Next 100 goes a step further: the steering wheel and centre console both retract, while seats and door trim merge together allowing driver and passenger to face each other.

BMW head of design, Adrian van Hooydonk, calls it a ‘future scenario that people would engage with’.

‘If, as a designer, you are able to imagine something, there’s a good chance it could one day become reality’ he adds.