Does this new race car show what the next GT3 will look like? 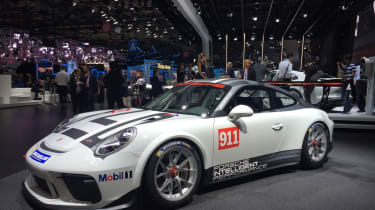 Porsche has unveiled its new GT3 race car. This is the first racing car the company has introduced since the launch of the new turbocharged Carrera, though purists will be pleased to hear that the 2017 GT3 Cup is refreshingly old-school.

The Cup adopts some of the styling cues of the new 911 road car, one example being the sculpted rear lights. However, the GT3 Cup shows us what we might expect the next 911 GT3 to look like. The 991.2 GT3 is imminent and we wouldn’t be surprised to see it with a similar front bumper and nose to this GT3 Cup.

It’s the 991 GT3 road car that acts as a homologation base for the GT3 Cup. For power, however, the car uses the naturally aspirated 4-litre flat-six of road-going GT3 RS. The engine in the GT3 Cup has been adapted to cope with the stresses of continuous abuse a race engine must deal with, but it actually produces slightly less power. 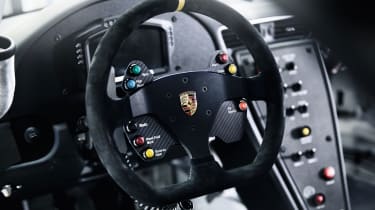 The new car, which looked superb on its stand at the Paris motor show in full works livery, will replace the outgoing GT3 Cup as the most junior 911 racer when it reaches customers later this year. It will sit beneath the RSR (think Le Mans 24 Hours) and GT3 R (think Blancpain GT Series) but above the new Cayman GT4 Clubsport in Porsche’s customer-racing hierarchy.

Drivers in the Porsche Mobil 1 Supercup (currently used for F1 support races) and from 2018 the GB Carrera Cup can look forward to 468bhp and 354lb ft, but they’ll have to work for it – peak power doesn’t arrive until a heady 8500rpm and torque until 6250rpm.

Upgrades to the engine include a stiffer crankshaft and an integrated oil centrifuge designed to optimise oil defoaming. The valve-drive also uses rigidly mounted rocker arms and there’s a central oil feed for the very first time. The upshot of this is that durability should improve and the cost of running the car during the course of a brutal season should decrease in comparison to previous years.

The GT3 Cup is also light. Stripped of non-essential weight, it weighs just 1200kg – some 220kg less than the GT3 RS. This is largely due to an aluminium-steel composite used for the body and various carbonfibre componentry dotted about.

The suspension setup is predictable, with MacPherson struts at the front and multilink at the rear. The Cup car does, however, benefit from forged control arms and heavy-duty spherical bearings to stiffen things up. The 18-inch wheels are also centre-locking, the brake discs are made of steel (not a carbon-ceramic composite), and sensors are in place for the retrofitment of an ABS system. 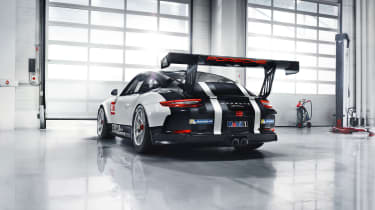 Like all racing 911s, the GT3 Cup also has a wing of colossal proportions – it’s nearly two metres wide and will contribute significantly to the efficacy of the 310-section rear tyres. For comparison, a GT3 RS uses 325-section rear tyres.

And just like all 911s full-stop, there is an extensive options list. Included on it are an endurance fuel-tank-upgrade, cockpit illumination (you’d think this would be standard), a suspension-travel sensor package and a heated windscreen for those dank days at Snetterton. You can also fit a passenger seat for ‘taxi rides’.

Porsche claims that with 3031 examples sold for the 996-, 997- and 991-generation model line, the GT3 Cup is the most popular GT racing car ever built. Deliveries for the latest iteration begin in December, and you can find a full spec and brochure for the car here.