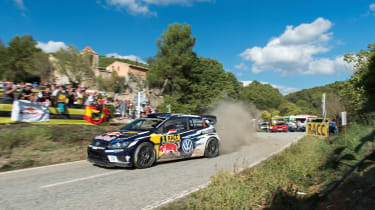 Ogier and his co-driver Julien Ingrassia took victory on the rally itself, giving the pair their fifth win this season and ninth podium, from eleven rallies so far.

There are just two events left to go this season - the Wales Rally GB and Rally Australia - but no driver can now catch Ogier's 222-point tally, currently 95 points ahead of teammate Andreas Mikkelsen.

Both Mikkelsen and fellow teammate Jari-Matti Latvala had difficulties in Spain, Latvala retiring from day one but returning on day 2 to take 14th position, and Mikkelsen rolling his Polo WRC beyond repair on the second day of the event. 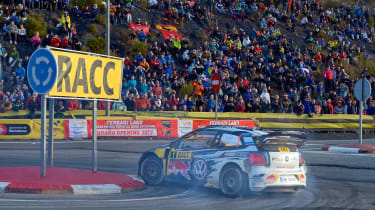 Brit Kris Meeke, not in championship contention this year despite victories in Portugal and Finland, also retired in Spain with engine troubles, and currently lies ninth in the series. The second and third podium places were taken by Dani Sordo and Thierry Neuville, both driving Hyundai i20 WRCs.

'It is impossible to describe how this feels', said Ogier after taking victory and snatching his fourth title. He described it as an honour to be mentioned in the same breath as Kankkunen and Mäkinen, and praised his Volkswagen squad. Both teammates congratulated Ogier and Ingrassia on their victory.

Interestingly, Ogier and Ingrassia's championship is the first in WRC history to have been won without taking victory on an all-gravel rally at any point during the season - his five wins have come at Monaco (mixed surface), Sweden (snow), Germany and France (both tarmac) and Spain (another mixed-surface rally).

Of course, with GB and Australia still to come - both gravel - Ogier could easily change that statistic; the Frenchman has won in Great Britain on all of his victorious seasons so far.