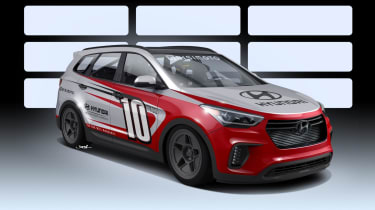 Hyundai might not have the sportiest reputation in Europe - though the N performance brand may soon change that - but it's been a long-standing exhibitor at the Specialty Equipment Market Association (SEMA) show in Las Vegas each year.

This year the brand has teamed up with four partners to produce four specially modified vehicles - including a ludicrous 1026bhp take on the firm's Santa Fe soft-roader.

Called the 'Santa-Fast', the show car is a collaboration between Hyundai and Bisimoto, an engineering firm best known for its work turning old Porsche 911s into high-horsepower monsters.

The Santa-Fast uses a 3.8-litre V6 powerplant unavailable in the UK, rebuilt by Bisimoto and boosted by intercooled twin turbochargers running 39psi (nearly 2.7 bar) of boost.

There's more to it than that of course - virtually every component of the V6 has made way for an uprated, aftermarket version - but Bisimoto has even replaced the standard car's all-wheel drive running gear with a custom rear subframe, Hyundai Equus rear differential and Genesis gearbox, to send power to the rear wheels alone.

It then rides on KW coilovers, 19-inch Fifteen52 wheels and 265/35 R19 Toyo R888 tyres. It's fair to say that any vestige of the Santa Fe's normal school-run duties has been eradicated. 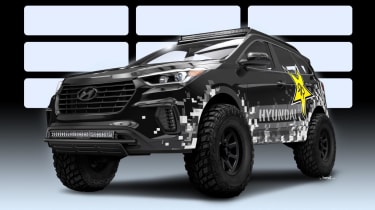 The other concepts are slightly less barmy in concept but equally striking in execution. Rockstar - the energy drink company - joined with a tuning firm called LDRSHIP in 2012 to form Rockstar Performance Garage, and has since been a regular on the show circuit. At SEMA it will reveal another Santa Fe, but this one - with a 3.3-litre V6 engine - is aimed more at off-road performance than straight-line speed.

As such it runs on 17-inch alloy wheels and 35-inch Mickey Thompson off-road tyres, with King coilovers front and rear, bigger brakes, heavy-duty underbody protection and (because what show-spec car would be complete without it?...) a nitrous injection system.

The final two concepts are slightly more conventional still, at least in terms of traditional performance cars. The first, a joint project with Ark Performance, is a turbocharged, wide-arched Elantra, its appearance echoing many of the current trends in car modification.

The second is the Gurnade Veloster Concept which again features wide arches, as well as a front splitter, canards and a large rear spoiler. The standard 1.6-litre turbocharged powertrain has been enhanced with an 845 Motorsports intercooler, downpipe and cold air intake and a new ECU map, with an ARK Performance cat-back exhaust system. Wheels are 19-inch three-piece affairs from Rotiform, wrapped in Toyo tyres.

It's fair to say that none of the concepts currently tally with Hyundai's image in the UK - improving though that image is - but when those N Performance vehicles hit the market, the sight of a wide-arched Hyundai may no longer be constrained to the US market.